The following  ~4 mm white-cream object was identified in the diaper of a 2 year old asymptomatic male.  Identification? 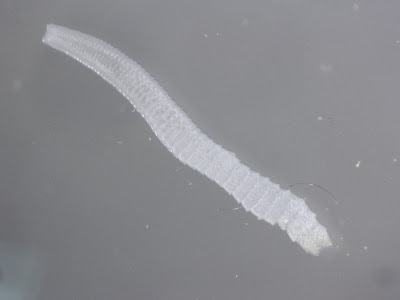 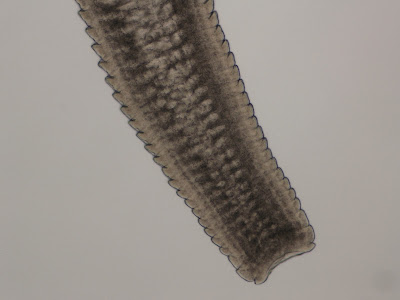 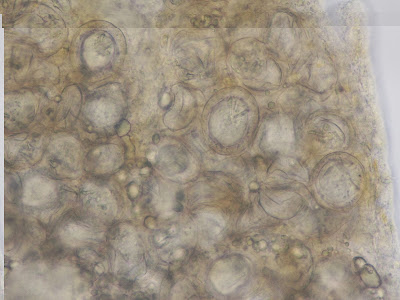 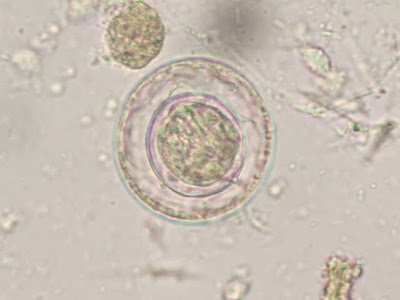 This worm is usually acquired through ingestion of an infected arthropod intermediate host, and is commonly seen in young children.  The characteristic eggs have an inner and outer membrane, with 4-8 polar filaments arising from the 2 poles of the inner membrane: 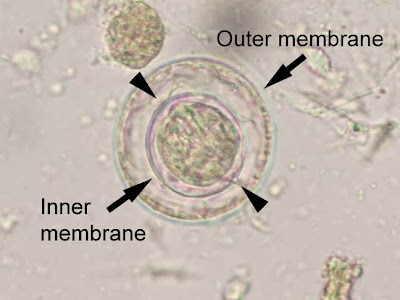 Internal hooklets are also usually seen and can be appreciated somewhat in this image.
Posted by ParasiteGal at 5:55 PM No comments:

This case was generously donated by Florida Fan. 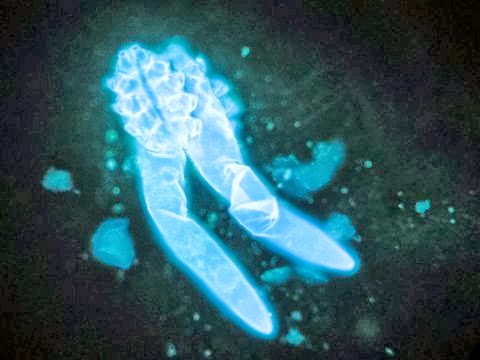 There are 2 described species of human Demodex mites: D. folliculorum found in hair follicles, and D. brevis, found in sebaceous glands. Demodex canis infects dogs but can also be a zoonosis in humans. These little guys can be considered normal fauna of humans and are found in up to 2/3 of elderly individuals. Fortunately most individuals are asymptomatic.

Most labs usually use a simple wet-prep when looking for Demodex mites.  In this case, these mites were a fortuitous find on a preparation designed to identify dermatophytic fungi and are probably not the cause of the patient's symptoms. 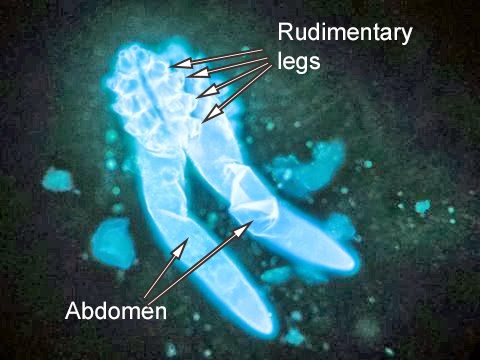 And now our poem from Blaine Mathison:

Living peacefully down in the sebaceous gland
is the fairest of the mites in all the land
not to be confused with his sarcoptid kin
Demodex doesn’t cause scabies on the skin
but a saprophytic life that’s really quite bland
Posted by ParasiteGal at 8:35 PM No comments:

The following was identified in skin scrapings from a patient with an itchy rash on his hands and wrists.  It measures approximately 100 micrometers in greatest dimension. Note, the video looks best at maximum size.

Answer:  Egg of the scabies mite, Sarcoptes scabei.  Note that you can still see it moving within the egg.  The scabies mite has short 'stumpy' legs that terminate in long spines (see case 236) and one of these spines can be seen moving inside of the egg in this case. 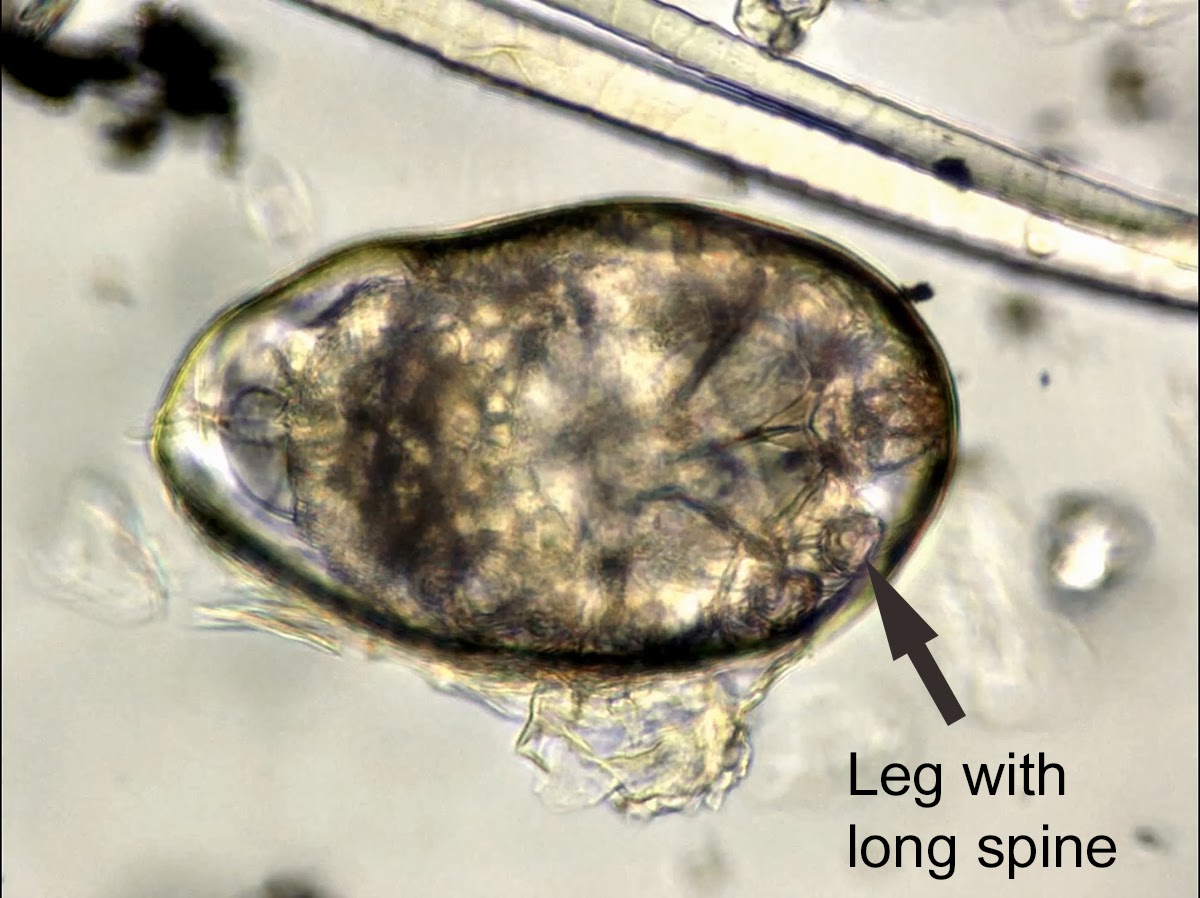 Just for fun, we tried to allow the egg to hatch; however it eventually stopped moving and we think that the mineral oil in which the specimen was collected ended up suffocating the mite before it could emerge.
Posted by ParasiteGal at 6:07 PM No comments:

Dear loyal readers,
You may have noticed that there was no case last Monday.  This is because I was off on vacation to Yellowstone National Park - a final destination that didn't work out after all due to the government shutdown.  That was a bit of a let down to say the least.  However, we hit several amazing state parks including Hot Springs state park in Wyoming, and I was able to sample the water for thermophilic free-living organisms.  Here are some photos and videos of our trip (yes, I really did bring a microscope along on my vacation): 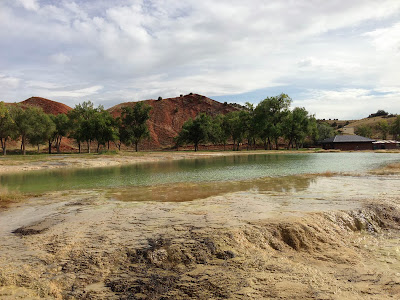 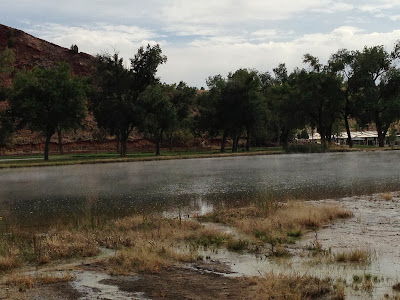 (notice the steam coming off the water in the second shot)
And what I found (taken with an un-mounted iPhone, so not the best quality):

Posted by ParasiteGal at 9:09 PM 5 comments:

Thank you for all of the responses!  Yes, we are probably looking at some type of thermophilic or thermotolerant free-living nematode.  (I wonder if there any of them swimming with us in the public hot springs swimming area?) One good suggestion was that this was Caenorhabditis elegans, a widely studied free-living nematode with some interesting biologic features.  Since I didn't have a permanently mounted specimen (or even a non-moving specimen) to look at, I wasn't able to examine all of the morphologic features, so I'm afraid we will have to be satisfied with a non-specific identification for this case.  I do have a great poem for Blaine Mathison for this case though:

On a diplomatic mission to meet Yogi the Bear
Bobbi’s trip got derailed due to a government snare
And with no end in sight
as politicians continue to fight
the fate of our nation is left hanging in the air
Posted by ParasiteGal at 5:35 PM 1 comment: