The following objects were seen on Giemsa-stained touch preps of a skin biopsy from a patient with a slowly enlarging ulcer. He had recently travelled to Costa Rica. Identification? What additional testing is indicated? 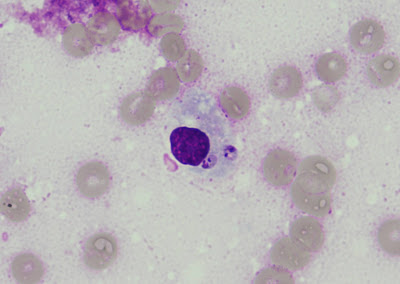 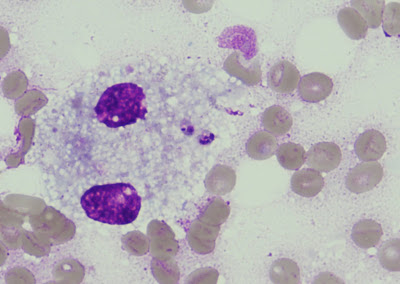 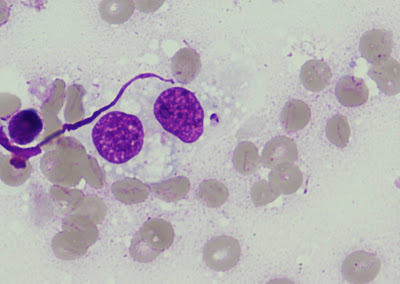 Posted by ParasiteGal at 7:28 PM 5 comments:

Answer: Leishmania species amastigotes within a host phagocytic cell. Note the characteristic "dot-dash" morphology of the amastigotes, representing the nucleus and rod-shaped kinetoplast: 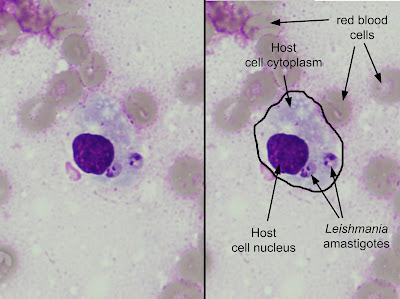 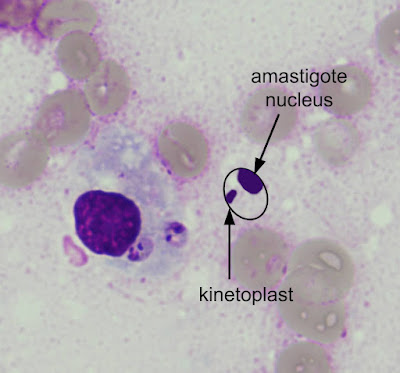 Given the travel history to Costa Rica, additional testing is indicated to determine the species of Leishmania present. Some species in Latin America are capable of causing mucocutaneous leishmaniasis - a destructive form of disease that is difficult to treat. If the patient is infected with one of these species (e.g., L braziliensis), then more aggressive treatment is warranted.

Species identification is best accomplished by first growing the organism in culture and then performing isoenzyme analysis, or more commonly today, sequencing.

Posted by ParasiteGal at 1:03 PM No comments:

This week's case was donated to us by Dr. Will Sears. He and his wife found the following worm in a puddle in Zion national park. This interesting worm is also occasionally submitted to the clinical parasitology laboratory. What is it? 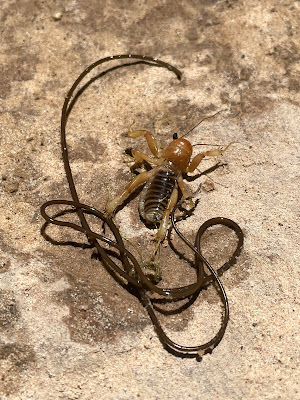 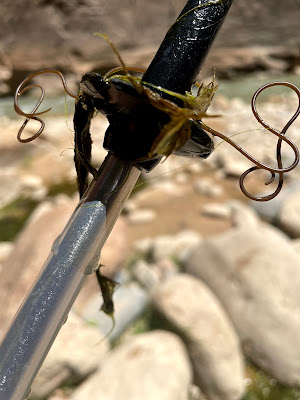 Posted by ParasiteGal at 8:58 AM 8 comments:

Answer to the Parasite Case of the Week 646: Gordiid/nematomorph, a.k.a. horsehair or Gordian worm (Nematomorpha: Gordiida). Not a human parasite.

This is one of my favorite human parasite mimics. It is occasionally submitted to the human clinical parasitology laboratory - often after being found in the toilet or other body of water - and can be easily differentiated from true human parasitic worms by its long slender shape, said to resemble a horse hair.

The Nematomorpha is the sister phylum to the Nematoda. Although these phyla share many features such as their general body shape, color, cuticle, and body organization, several key differences delineate these phyla. First, all members of the Nematomorpha are parasites as juveniles but free-living as adults. Second, due to their parasitic lifestyle, the nematomorph gut is largely non-functional, and juveniles feed by absorbing materials directly through their cuticle. Freshwater nematomorphs (Nematomorpha: Gordiida), or gordiids, are a unusual group of parasites that mate and oviposit outside of their hosts. Members of this phylum are strongly sexually dimorphic and until now have been described as dioecious. The unique gordiid life cycle involves transition of parasites within terrestrial arthropod hosts to free–living aquatic adults, which is partially achieved by parasite manipulation of hosts to commit ‘suicide’ by jumping into water triggering worms to escape. Freshwater gordiids use various definitive hosts including hemimetabolous insects such as orthopterans (crickets, grasshoppers, and locusts), cockroaches, and mantids, and holometabolous insects such as beetles.

This is the third time we have posted a case of a Gordian worm emerging from its cricket host. Check out the other posts here:

Case of the Week 549 and Answer

Case of the Week 185 and Answer

Posted by ParasiteGal at 11:20 AM No comments:

This week's case was donated by Seanne Buckwalter, and her golden doodle, Ruby. Ruby acquired this interloper from Seanne's back yard in southeastern Minnesota. Identification? And do you think the geographic location fits with the identification? Finally, what pathogens does this arthropod transmit? 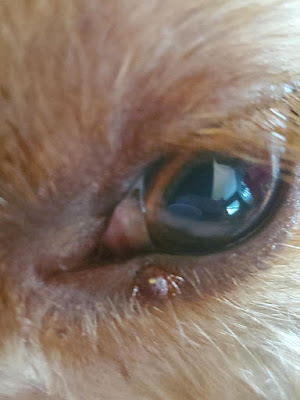 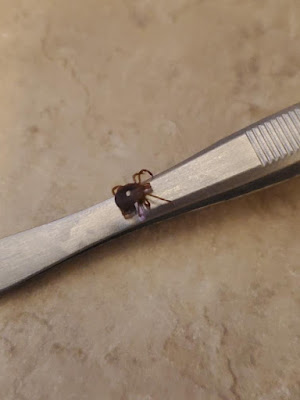 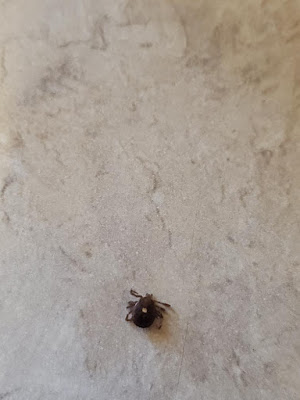 Posted by ParasiteGal at 8:18 PM 5 comments:

TheOracle nicely described what we are seeing here and its implications: "Given the position of the capitulum, we can immediately argue this is a hard tick (family Ixodidae). Even though we don't have a ventral picture, the number of legs, the quite long mouthparths and, more importantly, the white spot on the scutum allow us to diagnose an adult female of Amblyomma americanum, even though Minnesota isn't the expected geographic location. This may possibly reflect the tremendous effects of climate change... 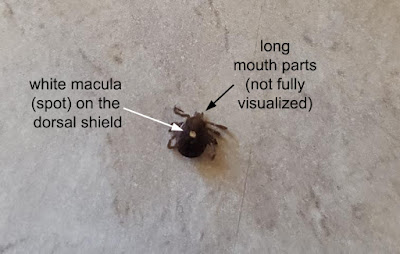 A. americanum is also associated with STARI and meat allergy.

Regarding the geographic location - Minnesota is not historically within the range of the Lone Star tick, but I believe that is changing with global warming. That doesn't bode well for Minnesotans, given the aggressive biting nature of both male and female Lone Star ticks! Thanks again to Seanne and Ruby for donating this case.

Posted by ParasiteGal at 2:08 PM No comments: