Here is a bit of an unusual case:  this was noted in a tube of "sterile saline" in another area of the lab and sent to parasitology for identification. 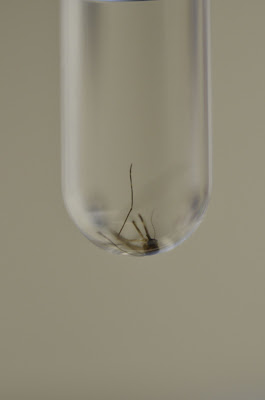 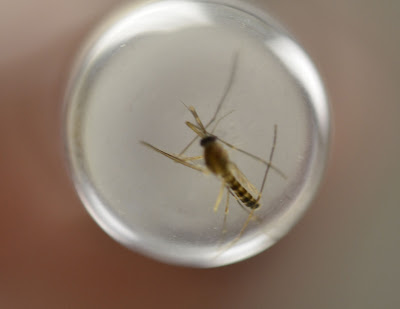 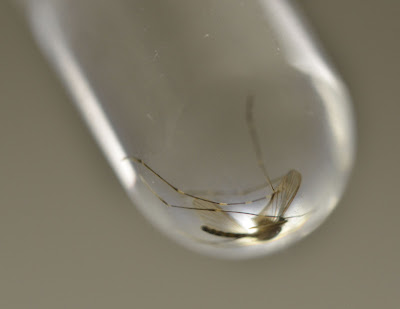 I apologize for not providing a genus and species level identification - the mosquito started falling apart when I went to remove it from the tube and I'd like to keep it intact as a display.  However, one of my viewers cleverly suggested that this was the previously undescribed Culex salinenis!

To answer the question of how it got into the tube to begin with, I had to investigate how the saline tubes are made.  First, empty glass tubes are received in bulk from the manufacturer in our media prep lab.  They arrive shrink-wrapped in plastic, and are stored like this until needed.  The tubes are then unwrapped in the media lab and immediately filled with sterile saline (also purchased in bulk) using an automated pipetting device.  This particular lot of saline-filled tubes was prepared in March, which is not a time when mosquitoes are known to be out and about in my neck of the woods (there is still snow on the ground).  Also, I don't think we've ever seen a mosquito in our lab, even in the height of summer.  So our best guess is that the mosquito was in the tube when it arrived in the lab, and we then unknowingly added the saline on top of it.  I doubt that the mosquito was in the saline, since I wouldn't expect it to survive intact through our pipettes.

After the tubes are filled, they were sealed and autoclaved, so technically, I guess the saline was still sterile(!)  The tubes were then inspected prior to being put into use, leading to this interesting discovery.

So regardless of how it got there, it was a great pick-up by our technologist and a good reminder of why quality control is so important in the laboratory.
Posted by ParasiteGal at 5:28 PM No comments:

This case was generously donated by MicrobeMan and Dr. Euna Choi:

A 56-year old male who had just returned hom from a safari in Uganda presented with a red swollen nodule over the right iliac crest and a 1.5 cm x 0.5 cm white-tan object was removed and submitted to surgical pathology.  The following are H&E stained sections of this object: 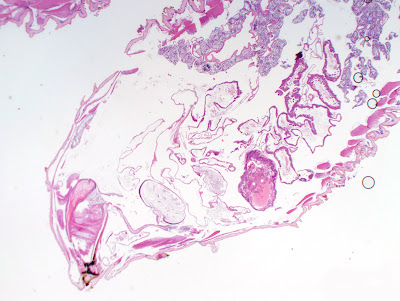 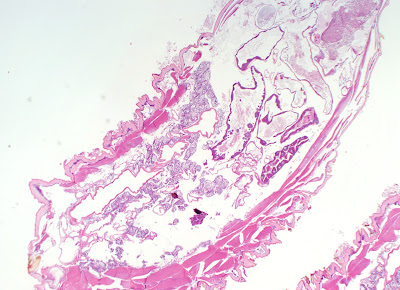 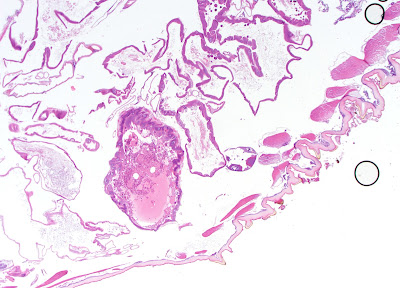 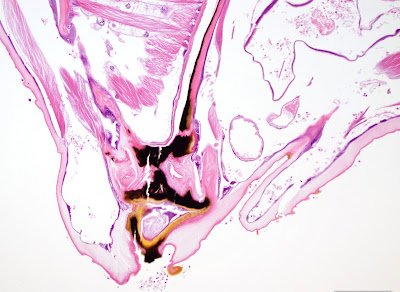 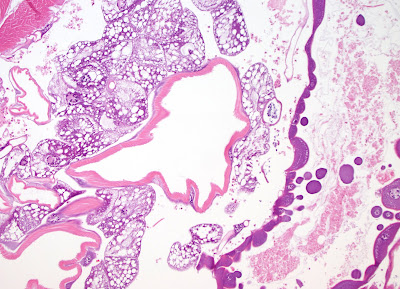 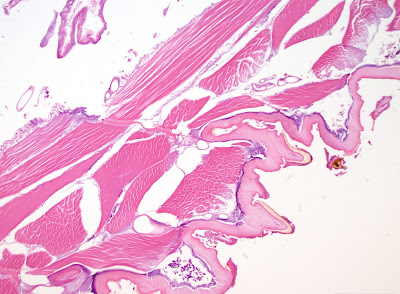 Many commented that identification becomes more challenging when arthropods are sectioned and stained since the external features are obscured or lost.  However, there are still features that allow us to positively identify this as a fly larva such as the overall size and shape, mandibles, and yellow cuticular spines: 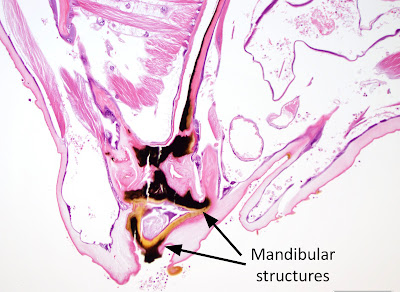 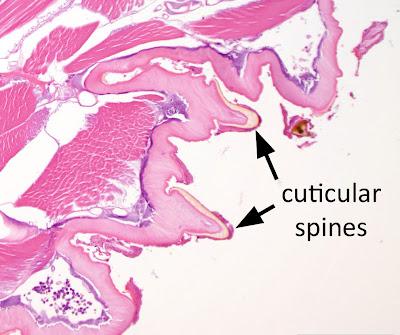 Unfortunately, definitive identification to the genus or species level is not possible without macroscopic examination of the larva.  Therefore, we instead must rely on the clinical history, which would suggest that this larva is likely Cordylobia anthropophaga, otherwise known as the mango fly, tumbu fly, or putzi fly.  This myiasis causing fly is endemic to parts of east and central Africa, including Uganda, where it is a common cause of human myiasis.

One reader commented on the difficulty of identifying fly larvae, particularly in settings without access to a microbiology lab with entomologic expertise.  In these cases, a service that I find to be incredibly useful is the free and rapid e-consult service through the CDC DPDx team.  Turn-around-time is generally < 24 hours.  You can access their email and submission form HERE.

Posted by ParasiteGal at 7:47 PM No comments:

Welcome to Case 250!  Here is a challenging case (in a little more detail than normal) to commemorate this milestone post:

A 90-year-old male from Missouri presented with a 3-day history of fever and dyspnea. His medical history included hypertension and splenectomy due to injury. He lived with his wife and reported no recent travel, pet or known tick exposure.

The Babesia microti PCR was negative, as well as a multiplex PCR for Ehrlichia ewingii, E. chaffeensis, and Anaplasma phagocytophilum, but the giemsa-stained, peripheral blood thin films showed the following (CLICK ON IMAGES TO ENLARGE): 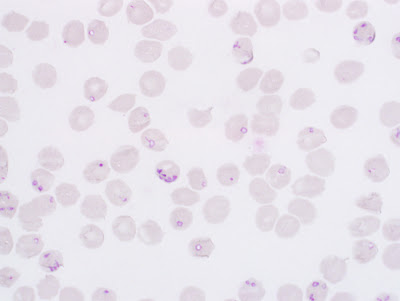 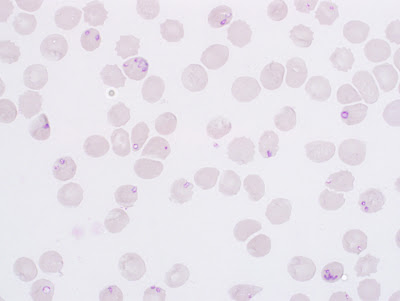 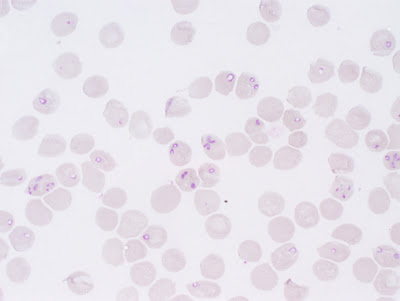 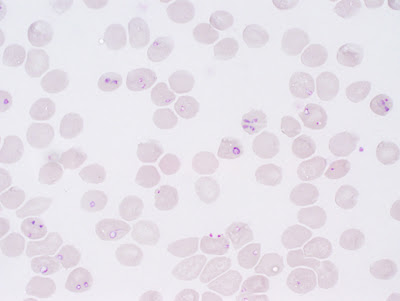 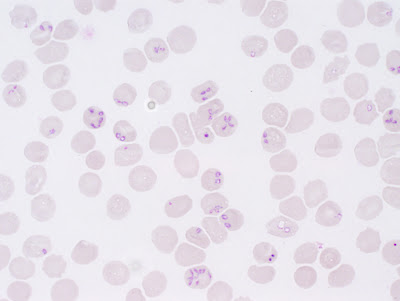 What is your diagnosis?  How would you further work up this case?
Posted by ParasiteGal at 12:36 PM 14 comments:

Answer:  Babesiosis, due to a species other than B. microti

Thank you all for the comments!  Most of you realized that there was something special about this case given the classic morphologic features of babesiosis (with many tetrads/maltese cross forms), supportive clinical history, and yet repeatedly negative PCR tests for B. microti.  (The fact that I chose this as the 250th case probably also let you know that there was something unusual about it!)

As some of you mentioned, the blood film results are diagnostic for babesiosis, regardless of the PCR results, and therefore further work-up is not necessarily required for patient care.

However, we were very curious to know what the causative species of his infection was and felt that the negative PCR had important epidemiologic considerations. Therefore, we sequenced the amplified DNA and also sent the specimen to the CDC for further testing.  Results from all studies showed that this patient was infected with the newly described MO-1 strain, reported to date only from Missouri.  Unfortunately, this patient died despite initiation of treatment, thus showing that the MO-1 strain is a potentially serious infection in certain hosts.

If the patient had been from the west coast of the U.S., you could also consider B. duncani as a potential causative agent, while travel to Europe could have placed him at risk for B. divergens.  Serologic testing shows some cross-reactivity between the different Babesia species so it might have been helpful in confirming that the patient had babesiosis.  However, it's important to remember that it takes several weeks to generate a detectable immune response and he might have been seronegative at the time of presentation.

Thank you all for your continued support and feedback for my milestone case.


And now, our poem from Blaine Mathison:

To separate Babesia from malaria
Might send one into a bout of hysteria.
But the cytoplasm's vacuolated.
And no pigment has been generated.
With no travel to a malaria endemic area.

Posted by ParasiteGal at 11:57 AM No comments:

Only 1 more week until we get to case 250! We're almost also at our 6-year anniversary.  My first post was on March 25, 2007. Time flies...  I'm still accepting suggestions if you have a special parasite that you would like to see for Case 250.

Now on to this week's case - another donation by Florida Fan with a story to go with it:

"While checking the air conditioner outside a rental property for a friend, we were swarmed with these (insert identification here). While they barely measured 2mm in length, they had no difficulty jumping up to our knees and at least an inch or two higher. The blood meal is still evident in the abdomen." 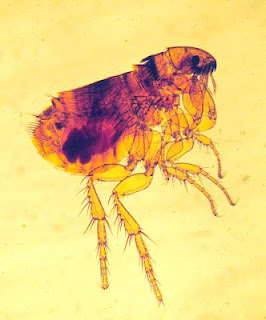 Answer:  As stated by Eagleville, "Jumpin' Jehosaphat! It's a flea. Sez me."

This is indeed a flea, an insect of the order Siphonaptera.  Adult fleas are characterized by their laterally flattened wingless bodies, long legs designed for jumping, and tube-like mouthparts for feeding on blood from their host.  The presence of both genal and pronotal combs (shown below) with more than 5 "teeth" on the genal comb allow this flea to be identified as either Ctenocephalides felis or C. canis, the cat and dog flea respectively.  Identification to the species level is based on more subtle characteristics of the hind tibiae and head. 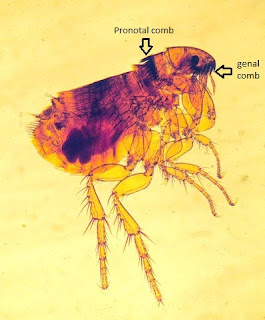 For some additional Flea Fun, check out this YouTube video that shows how fleas jump using their "feet" rather than their "knees."

Of interest, knowing whether or not the patient has dogs or cats in their house does not help in differentiating between C. felis and C. canis since they can both feed on either host.

When Ctenocephalides felis and C. canis are ingested - usually accidentally - they can transmit the tapeworm, Dipylidium caninum.


And now, our poem from Blaine Mathison:

Ctenocephalides is known as the cat flea
and among Garfield’s fur lives so happily
but be careful not to ingest
this siphonapteran pest
or you’ll find D. caninum proglottids in your poopie

Dear Readers,
We are approaching the 250th Case!  I think that #250 should be extra special and therefore I will be looking through all of my archives for something really fun.  If any of you have any suggestions for a case you'd like to see, please let me know and I'll see what I can do.

Now, on to this week's case, donated by Florida Fan:
(a bit of a challenging case)

The following were seen in a stool specimen from a 3 year old male.  No other history was provided.  Identification? The images were taken at 40x magnification, so each each mark on the scale bar represents 2.5 microns (eggs measure approximately 100 microns in length by 50 microns in width). 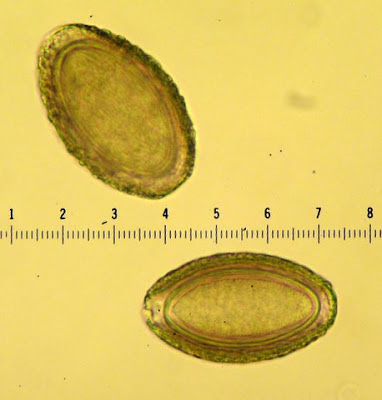 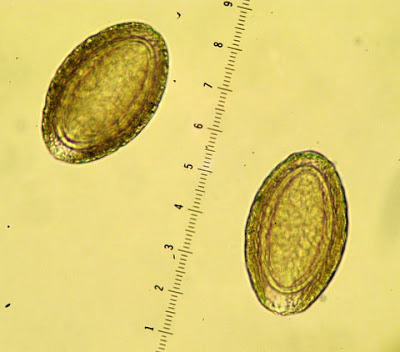 Posted by ParasiteGal at 7:45 PM 8 comments:

The main Macracanthorhynchus species that infects humans is M. hirudinaceous, although a second species, M. ingens, can also rarely infect humans (there have been a few case reports), and the eggs of the two cannot be differentiated microscopically.

Humans typically become infected following ingestion of larvae in the intermediate insect host - usually hydrophilid or scarabaeoid beetles for M. hirudinaceous and milipedes for M. ingens.  I tend to agree with Anonymous that the child was more likely to eat a beetle than a miilipede, but you never know with kids! Humans are accidental hosts, while the definitive hosts in nature are pigs for M. hirudinaceous and carnivores such as raccoons, dogs, and foxes for M. ingens. Following ingestion, the larvae may mature, mate, and produce eggs, although maturation in humans does not always occur.

Eggs may also been seen in human fecal specimens if the child has ingested dirt containing the eggs (i.e. pica).  This does not represent true infection, but rather spurious passage of eggs.

The eggs are easily recognized by their large size and coarsely textured, thick-walled brown-yellow eggs: 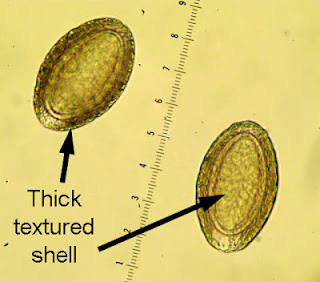 And now, believe it or not, Blaine has managed a poem for us!

Posted by ParasiteGal at 1:47 PM No comments: