A businessman recently returned from India with recurring fevers and malaise.  The following were seen on peripheral blood films.  Identification? (CLICK ON IMAGES TO ENLARGE) 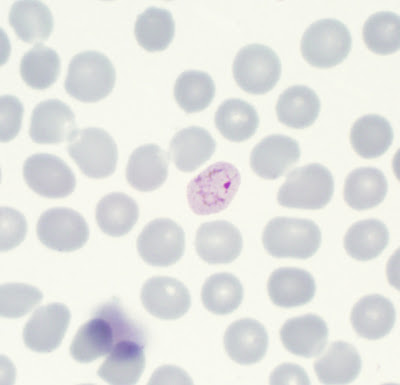 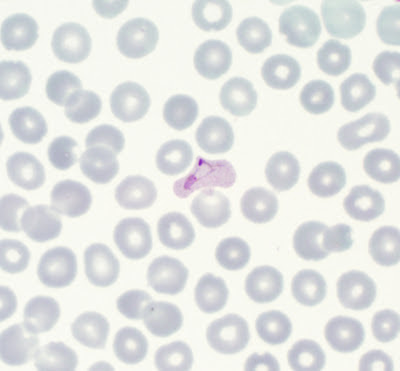 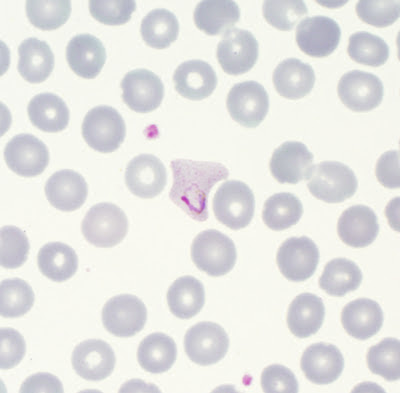 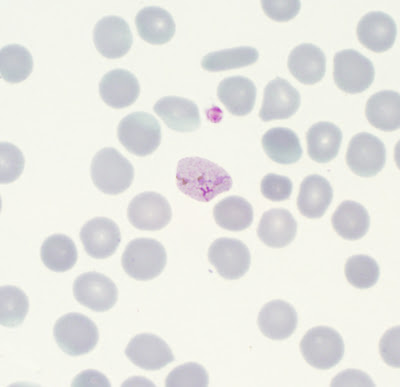 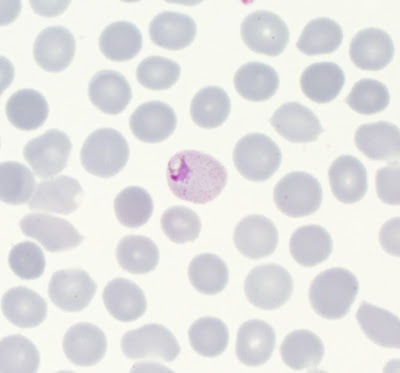 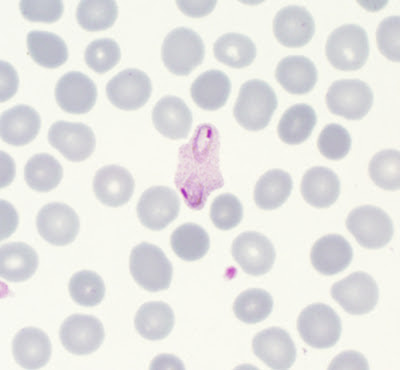 There was a lot of great discussion on this case!  The definitive features for identification as some readers pointed out were:

1.  Enlarged infected RBCs (compared to uninfected cells)
2.  Stippling seen in all forms (a.k.a. Schuffner's dots)
3.  "Ameboid" shaped of some trophozoites.

The presence of stippling and enlarged size of the RBCs automatically puts this into the P. vivax/P. ovale category, and the next step is to differentiate between the 2 species.  This can be done by considering the following features: 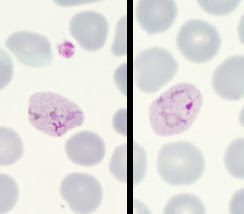 (Note that the infected RBCs are enlarged and have fine stippling)

Also, the infected RBCs have a tendancy to 'hug' or mold to the neighboring RBCs.  Although this is a 'soft' diagnostic feature, it supports the diagnosis of P. vivax infection rather than P. ovale infection. 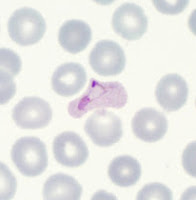 Finally, some of you mentioned that the presence of a multiply-infected RBC indicates that this is a P. falciparum infection.  In fact, it is not always appreciated that P. vivax (and even other species) can also have multiply-infected cells.  Notice however, that in this case (as shown below), the infected RBC is enlarged, there is fine stippling throughout, and the rings are relatively large and thick; all three of these features would argue against P. falciparum and point instead to P. vivax or P. ovale infection. 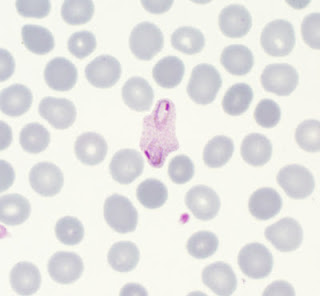 Here is an image from a previous case of P. falciparum for comparison, demonstrating the normal sized RBCs and thin, delicate, small ring forms (less than 1/3 of the size of the infected RBC).﻿ 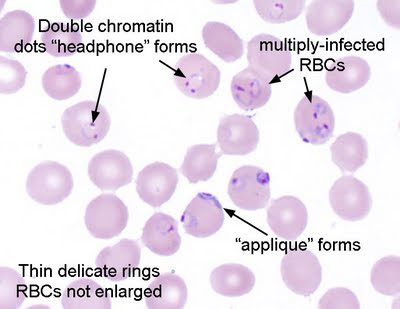 And now for our excellent poem from Blaine Mathison:

While staring in a film for Bollywood
Bobbi got bit by a skeeter! That’s no good!
This vivax may relapse
in a few years perhaps
Better start gnawing on a piece of chinchona wood


(I'm Bobbi by the way, although I don't know about the Bollywood part!)

Posted by ParasiteGal at 7:18 PM No comments:


The following was sent to the parasitology laboratory for identification: 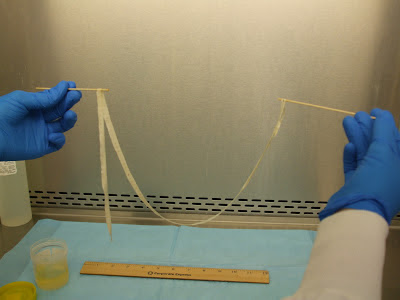 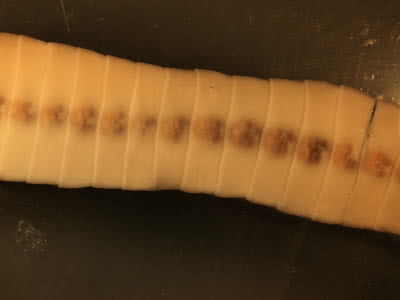 The accompanying fluid was centrifuged and the pellet was examined microscopically, revealing the following object.  If measures approximately 60 microns in greatest dimension. 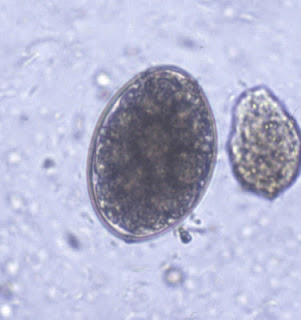 Identification?﻿
Posted by ParasiteGal at 11:42 AM 8 comments:

As leo-a-go-go said, "...no way of speciating it by microscopy alone, without a geographic history.  Would be useful to know if offending fish was from salt or freshwater."  Anonymous also noted that "If the patient is from South America, might be D. pacificum rather than D. latum."  Worldwide, D. latum is the most frequently reported species in humans.  However, the DPDx web site notes that "Several other Diphyllobothrium species have been reported to infect humans, but less frequently; they include D. pacificum, D. cordatum, D. ursi, D. dendriticum, D. lanceolatum, D. dalliae, and D. yonagoensis."

Diphyllobothrium spp. proglottids are easily recognized by the fact that they are broader than they are long (hence the name 'broad fish tapeworm') and the characteristic 'rosette' shaped uterus: 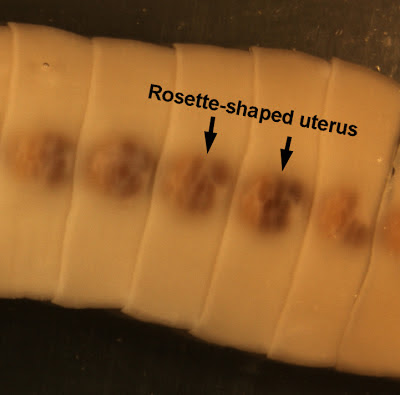 Better examples of the rosette-shaped uterus can be seen from previous cases HERE.


And now, our weekly poem from Blaine Mathison:

All that raw fish, you really shouldn’t have ate ‘em
cuz now you have Diphyllobothrium latum
you did it on a dare
never mind the potential scare
Your buddy who bet you? I bet you now hate him!


Posted by ParasiteGal at 9:52 AM No comments:

The following were observed in the stool of a 50 year old male with hepatosplenomegaly from Egypt.  Identification? (CLICK ON IMAGES TO ENLARGE) 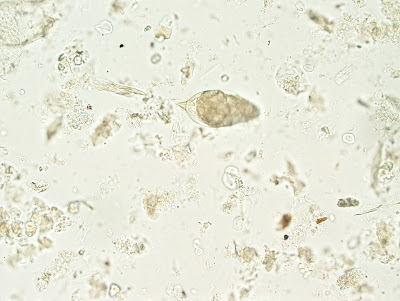 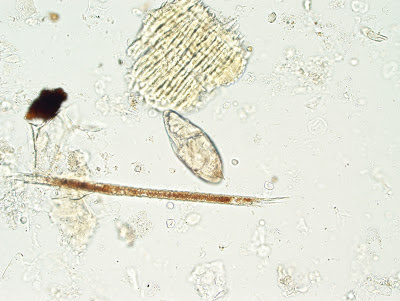 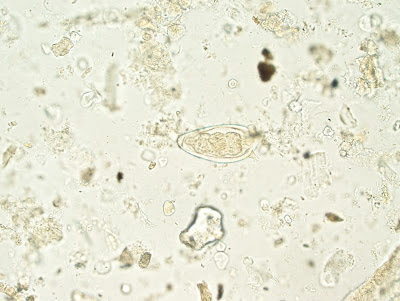 Posted by ParasiteGal at 4:07 PM 5 comments:

This was a bit of a 'trick' case, since many of the lateral spines were skewed and therefore some appeared to be present at the terminus of the egg rather than the lateral aspect.  However, a closer examination shows that the spines are at a number of different angles and are larger than would be expected for a S. hematobium terminal spine: 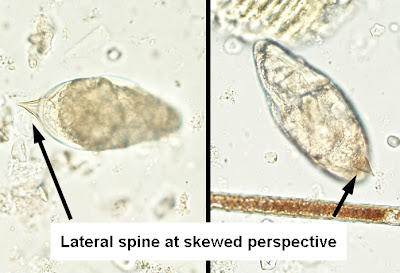 Compare these 'skewed' spines to a true terminal spine of S. hematobium: 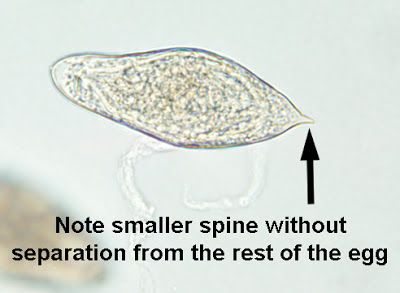 The other helpful feature of this case is that nicely oriented lateral spines, characteristic of classic S. mansoni eggs, are also present.  While it is not impossible for both S. mansoni and S. hematobium eggs to be present in the same specimen, it would be highly unlikely. 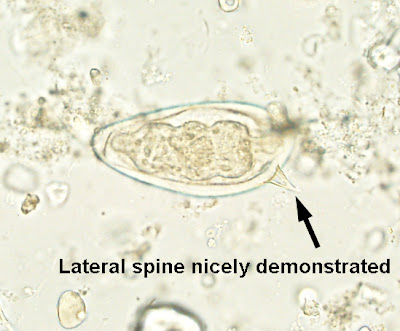 And now a poem from Blaine Mathison:
Octavius’ Roman legions were advancin’
and Anthony didn’t want to be held for ransom
he had too much at stake
so he jumped in a lake
and acquired the trematode named for Patrick Manson

Posted by ParasiteGal at 11:27 AM No comments:

The following was an incidental finding on colon biopsy.  The referring pathologist queried if this could be a small parasite.  Identification? 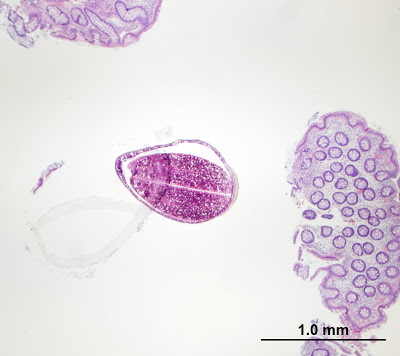 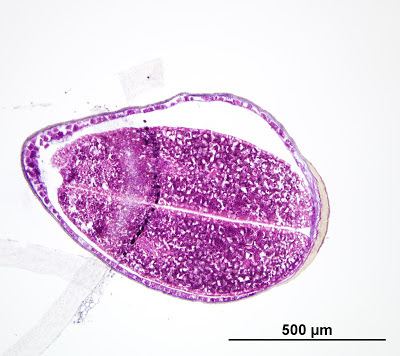 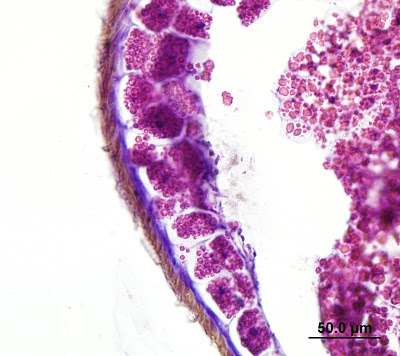 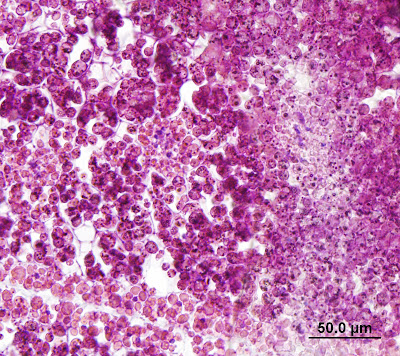 Many thanks to MicrobeMan for donating this case!
Posted by ParasiteGal at 7:26 PM 7 comments:

Answer:  Plant material, or as bks and zanarditos said "Not a parasite! Cell wall+outer coat make me think of a SEED!"

I agree that this is most likely a seed, given its roughened outer coat and 2 internal structures which may represent seed leaves or "cotyledons." 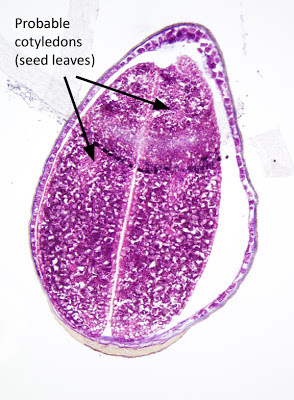 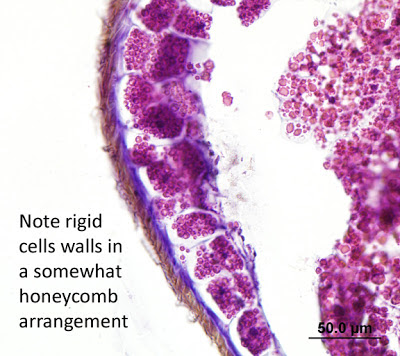 The differential diagnosis could include the small intestinal flukes such as Heterophyes heterophyes, given it's similar size and shape.  However, the internal morphology is much different, and the presence of diagnostic eggs in the uterus easily allows for the diagnosis. 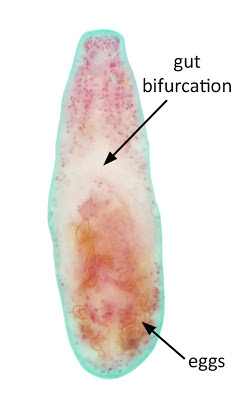 Shown above is an adult H. heterophyes fluke.

And now an 'inspirational' poem from Blaine Mathison:

Going to the hospital one man felt the need
when going to the bathroom he started to bleed
amoeba? Not a chance!
Shigella? Take another glance.
Why it’s merely the remnants of a seed.