The following were seen on stool agar culture from a patient treated with steroids for another condition.  The patient presented with recurrent enterococcal meningitis and was being treated with antibacterial agents. (CLICK ON THE BOTTOM RIGHT OF THE MOVIE VIEWER TO ENLARGE)

Note:  for those of you who aren't familiar with the stool agar culture, here is the general gist of the assay:
Stool is placed on a clear nutrient agar (standard sheep blood agar for bacterial culture also works but is harder to see through).  The Petri dish is then taped shut and the plate is examined over a period of 4 or more days for any evidence of bacterial growth patterns consistent with migrating worms in the stool.
Posted by ParasiteGal at 8:51 PM 4 comments:

This appearance of motile larvae on agar culture is classic for strongyloidiasis and fits with the patient's history of immunosuppression and enterococcal meningitis.  Meningitis in strongyloidiasis occurs when invasive L3/filariform larvae penetrate the intestinal wall and travel through the blood stream to the CNS, dragging gut bacterial with them.  Escherichia coli is the most common bacteria to cause meningitis in this setting, but other Gram negative bacilli and gut flora have also been reported.

Posted by ParasiteGal at 2:48 PM No comments:

The following material was submitted to the laboratory for identification of possible parasites.  No history was provided. 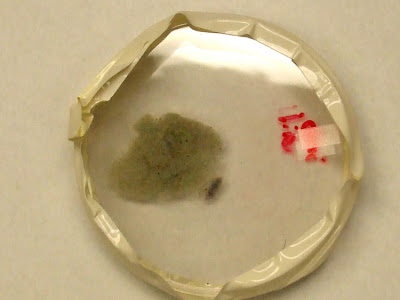 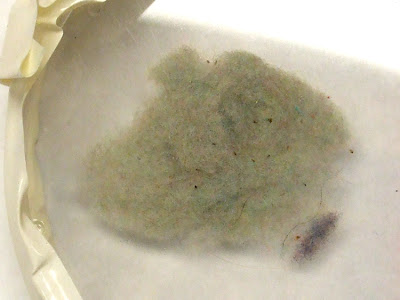 Under the dissecting microscope, the following were seen: 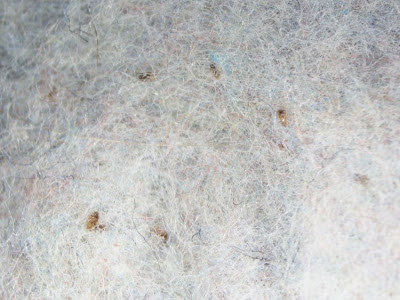 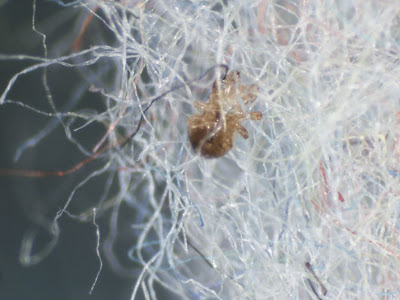 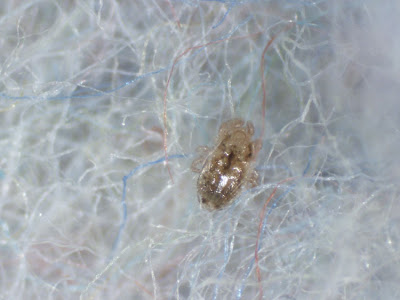 Our clinical microbiology fellow skillfully dissected a few of these arthropods out of the "fuzz" and mounted them on a slide.  Here is a representative specimen.  He also called the ordering physician to 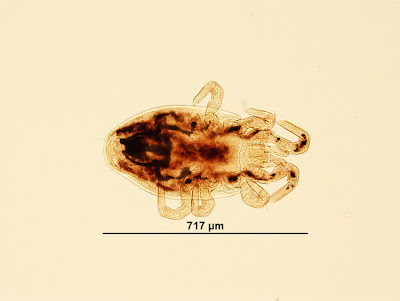 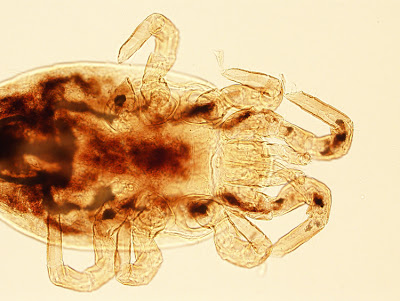 Identification?
How would you sign this case out?  (Is this a human parasite?)﻿

When we called the ordering physician, we were told that this "fuzz" was possibly part of a bird's nest that was found by a concerned patient.  It was unclear why the material was sent to the laboratory for identification, other than the fact that the patient was VERY concerned that the mites were a threat to her.  According to the physician, the patient had not exhibited any bites or rash that would be consistent with mite bites.

Although we do not have a full identification on these mites, we can say that they are most likely fowl mites, based on their larger size and general appearance.  Their presence in the bird's nest would also be consistent with this identification. They are too large to be dust mites and are not consistent with scabies mite, Sarcoptes scabei.

Many "non-human" mites can occasionally bite humans, especially when the primary host (e.g. bird) is not available.
Posted by ParasiteGal at 2:31 PM No comments:

The following were seen on hematoxylin and eosin stained sections of small intestine. (CLICK ON IMAGES TO ENLARGE) 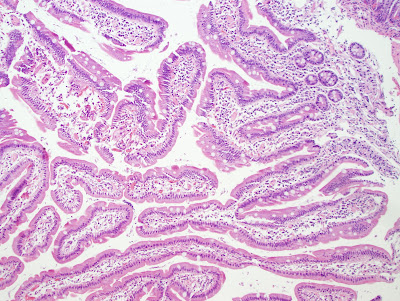 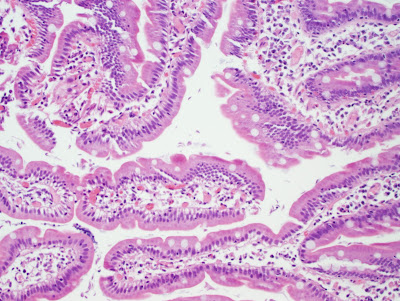 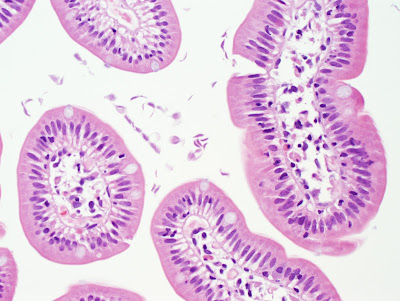 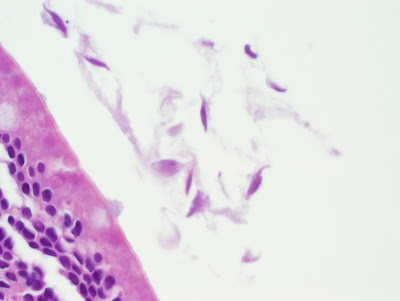 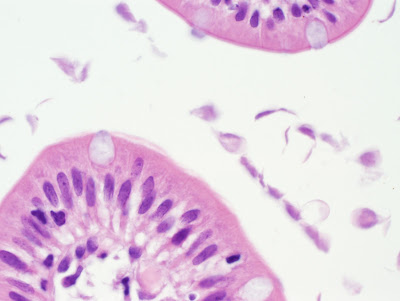 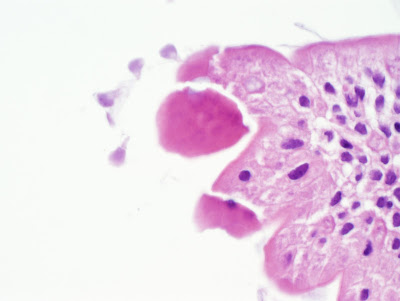 My many thanks to Dr. Ryan Relich (a.k.a. MicrobeMan) for sending this glass slide to me!
Posted by ParasiteGal at 10:33 AM 7 comments:

Even though the morphology is a little indistinct in these histologic sections, the classic shape of the trophozoites can be identified.  In some examples, the 2 nuclei and ventral sucking disk can also be seen (with a little imagination!).  The nice thing about histologic sections is that you also get the opportunity to see the trophozoites from the lateral view and realize how flat they actually are.  I tell my students that the curved thin shape of the trophozoites from the lateral view allows me to better understand their "falling leave motility." 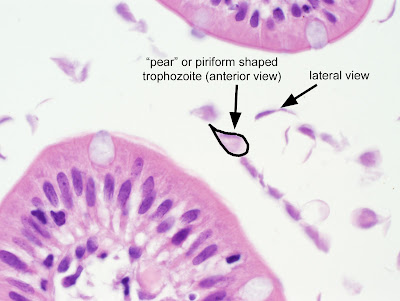 Posted by ParasiteGal at 10:05 AM No comments: 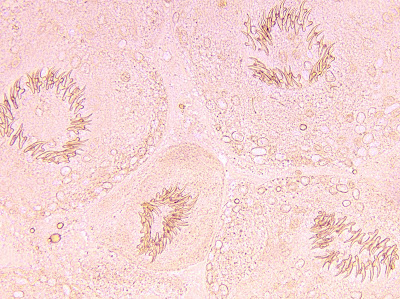 Based on this finding﻿, the cyst was resected and showed the following: 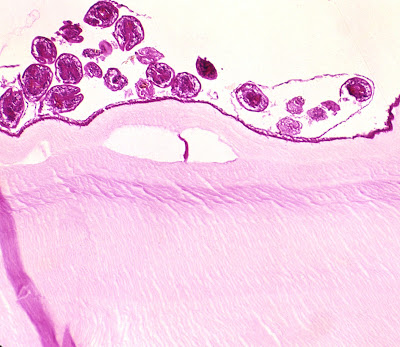 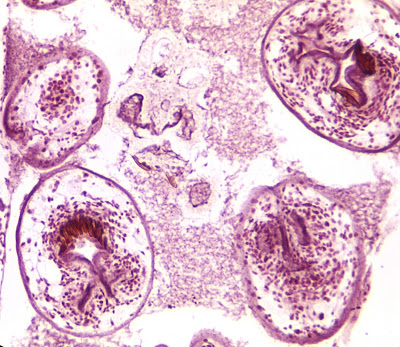 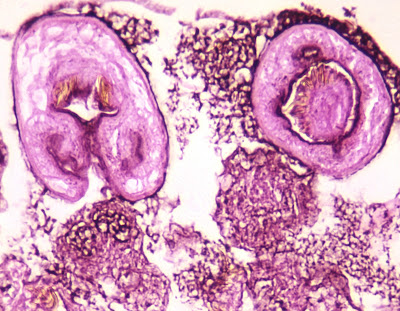 Diagnosis?
Posted by ParasiteGal at 10:38 AM 7 comments:

The most likely identification is E. granulosus, given the presence of a thick laminated membrane (2nd image) and abundant protoscoleces (images 1, 3, and 4).  The best image for demonstrating the hooklets is the wet prep, in which the full outlines can be seen.

Since other forms of echinococcosis can also have thin laminated membranes, and less commonly, protoscoleces, so I would want to see the full histopathologic sections in order to confirm the diagnosis.

Thanks to everyone who wrote in with their answers!
Posted by ParasiteGal at 10:29 AM No comments:

The following were seen on Giemsa-stained peripheral blood films from a 2 year old adoptee from Zimbabwe.  Identification?  Based on what features? (CLICK ON IMAGES TO ENLARGE) 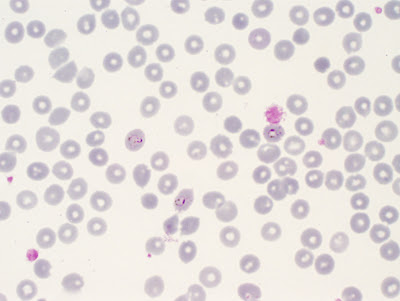 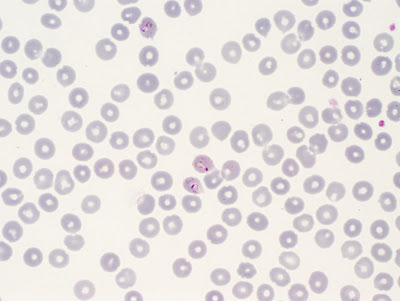 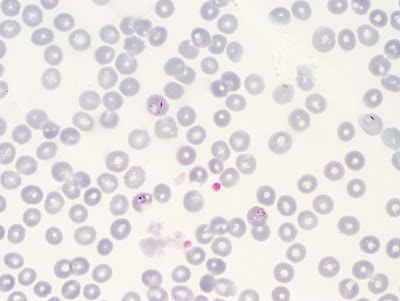 Shown here are early trophozoites (rings) of P. falciparum with Maurer's clefts.  Although some of the infected red blood cells (RBCs) have a ragged edge that may be mistaken for the fimbriations of P. ovale infected cells, the size of the RBCs is normal compared to the surrounding cells, the cytoplasmic dots (called Maurer's clefts) are few and large (compared to the numerous small stipples in P. ovale/P. vivax), and the trophozoite forms are delicate.  These three features support the diagnosis of P. falciparum rather than P. ovale.  I've highlighted some of these features in the images below. 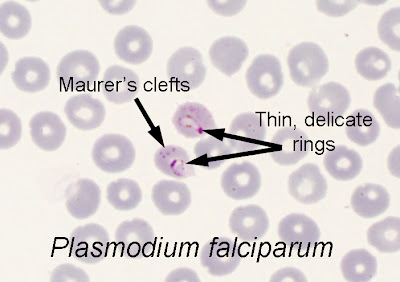 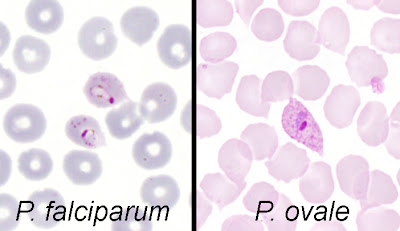 Thanks to everyone for writing in on this challenging case!
Posted by ParasiteGal at 8:45 AM No comments: