The following ova were found in a stool specimen from a patient with weight loss and chronic abdominal pain.  Identification? (CLICK ON IMAGES TO ENLARGE) 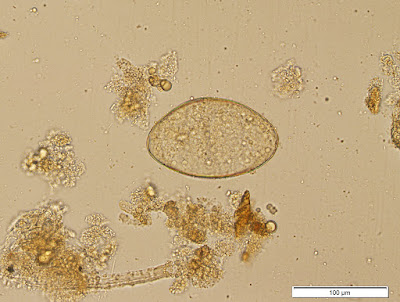 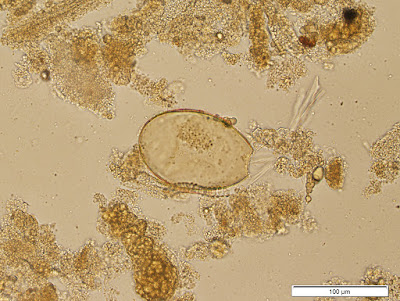 As a bonus, what is the structure seen inside the egg below? 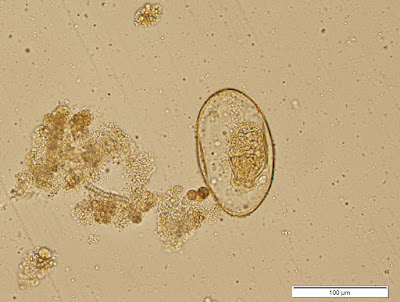 Posted by ParasiteGal at 3:59 PM 9 comments:

As pointed out by Florida Fan, this diagnosis can be made based on the large size of the egg (> 100 micrometers in diameter) and presence of an operculum. Several other readers also pointed out that the size is an important feature in differentiating F. hepatica/F. buski eggs from the similar-appearing but smaller eggs of Diphyllobothrium and Paragonimus. Unfortunately it is not possible to reliably differentiate the eggs of F. hepatica and F. buski by morphology alone. 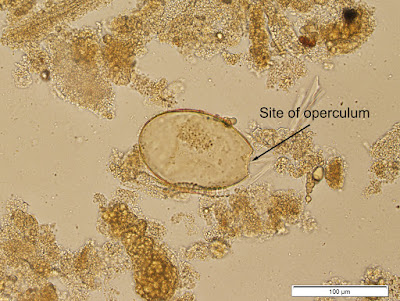 In the second part of this case, I posed the question of what the structure within the 3rd image is. What I should have told you is that the photos from this case were taken from eggs that had been incubated. Eggs of Fasciola/Fasciolopsis are shed from humans in an unembryated state and no definitive internal structures can be seen. However, after being released into fresh water, the embryo matures into a ciliated form called a miracidium. Arthur gave a nice description in his comment. 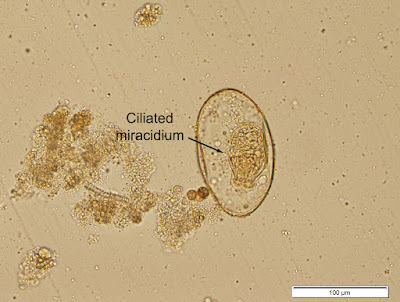 This week's case just came through my laboratory and was nicely captured by Emily F. The specimen is skin scrapings. Identification? 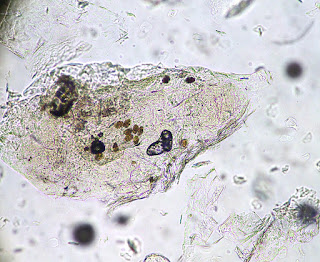 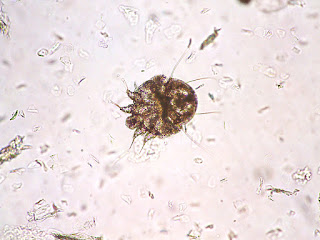 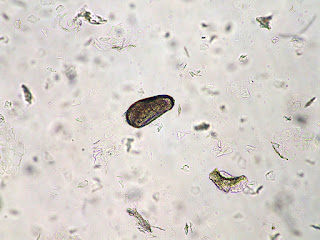 Posted by ParasiteGal at 8:53 PM 7 comments:

Answer: Sarcoptes scabei, the human "itch mite" and cause of scabies

Shown in this case are 3 characteristic forms of scabies seen in skin scrapings: a mite, egg, and feces scybala). 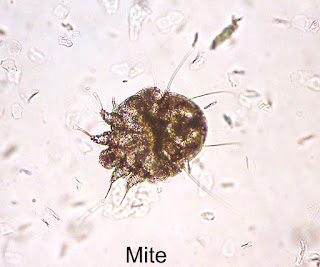 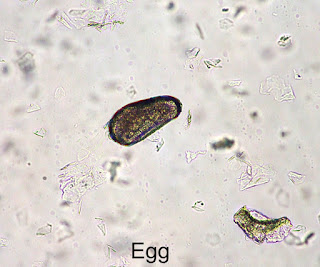 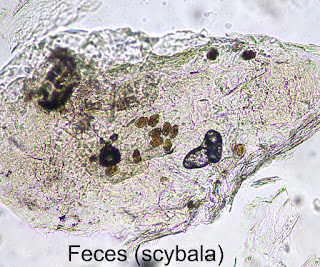 A special thanks to those wrote in with the answers and great stories!
Posted by ParasiteGal at 3:13 PM No comments:

This week's case was generously donated by MicrobeMan (Dr. Ryan Relich) and Dr. Dibson Gondim. The patient is a 70-year-old male with a conjunctival lesion that was surgically resected. It doesn't appear that he has travelled outside of the United States.

Here are some photos from the H&E-stained sections. Diagnosis? 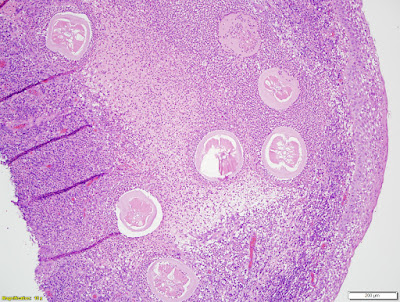 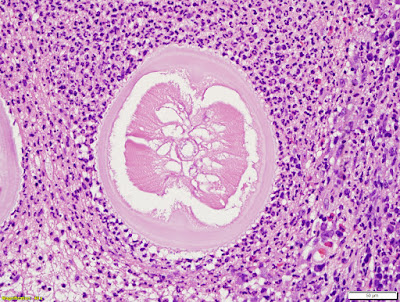 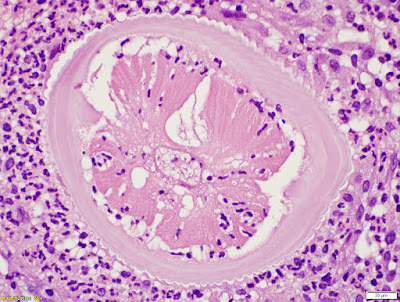 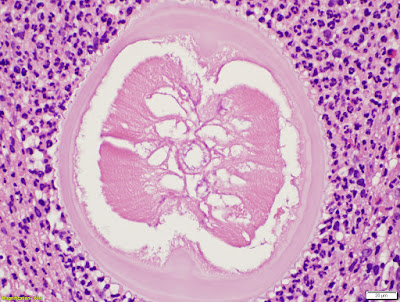 As several readers pointed out, the characteristic features in this case are the multi-layered cuticle with external ridges (arrow heads), polymyarian musculature, and well-defined internal cuticular ridges near the base of the lateral chords (arrows). 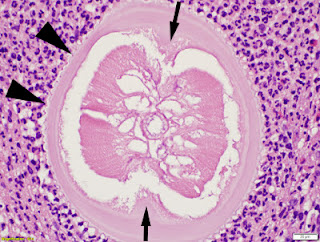 It's difficult to tell from the images if the central tube is part of the GI tract or male reproductive tract, given the degenerated nature of the nematode and neutrophilic infiltrate. As is common with dirofilariasis, worms are often in an advanced state of degeneration by the time they are removed and observed in tissue sections. Fortunately, some of the characteristic features of the cuticle are nearly always present and allow a diagnosis to be made based on morphology.

Dirofilaria repens and D. tenuis are the most common cause of subcutaneous and ocular dirofilariasis in humans. Given that the patient has not traveled outside of the United States, D. tenuis would be the most likely of the two.

Posted by ParasiteGal at 5:40 PM No comments:

This week's case was generously donated by Dr. Garcia-Kennedy: it is a urine specimen from a patient with malaria and high parasitemia levels. 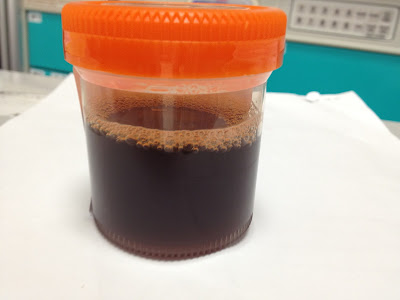 My questions for you are:
1. What is the name of this clinical syndrome?
2. What is the most common species to cause this?
3. What is the color of this urine specimen due to?
Posted by ParasiteGal at 3:48 PM 4 comments:

Here are the answers to this week's case:

Clinical syndrome - "blackwater fever" associated with hemoglobinuria and renal failure
Most common species to cause this - Plasmodium falciparum
Cause of the dark color - free hemoglobin due to intravascular hemolysis of infected erythrocytes.

This is fortunately a rare syndrome today, although it may be seen in non-immune adults with severe P. falciparum malaria. Hemoglobinuria may also be seen in children and adults in endemic areas but is not usually accompanied by renal failure. Interestingly, blackwater fever seems to be strongly associated with the use of quinine in patients with P. falciparum malaria, as well as in patients with G6PD deficiency.


Posted by ParasiteGal at 2:58 PM No comments: