This week's case was donated by Dr. Kamran Kadkhoda. It's a 'real life' case that I thought provided a fun challenge. The specimen was obtained from a 5 year old boy from Canada and submitted to the laboratory for identification. What do you all think? 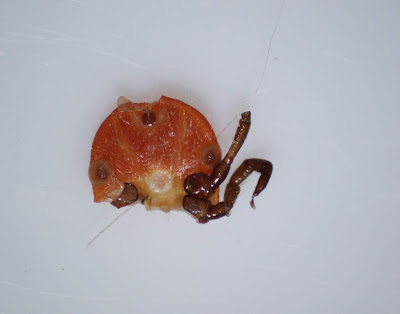 Posted by ParasiteGal at 9:49 AM 9 comments:

As Blaine, Idzi, Sheldon, Florida Fan, Richard, Agnes, and William nicely described, we can easily identify this tick fragment as an Ixodes species by its characteristic 'U-shaped' anal groove. Lack of festoons also supports the identification. One of our tick experts, Ellen, mentioned that the color is a good feature for determining sex, since female Ixodes are orange-brown while males are black and nymphs are transparent charcoal-grayish. Color can also be helpful for determining the degree of engorgement since adult females will become grayish-white once becoming engorged due to growth of new opisthosoma tissue. Thanks for the great description Ellen! 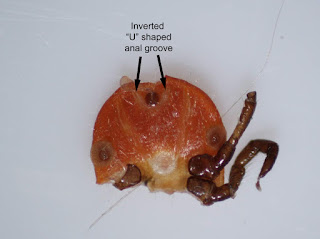 The tick is most likely I. scapularis, but could also be I. pacificus if it was from Western Canada. Dr. Kadkhoda (who donated this case) is in Manitoba, so I. scapularis would be most likely. Given the partial nature of this tick, we also need to consider other human-biting Ixodes species such as I. muris.


Posted by ParasiteGal at 8:31 AM No comments:

A patient with recent travel to southern Africa presented with fever and myalgias. The following are representative views from Giemsa-stained thick and thin peripheral blood films. 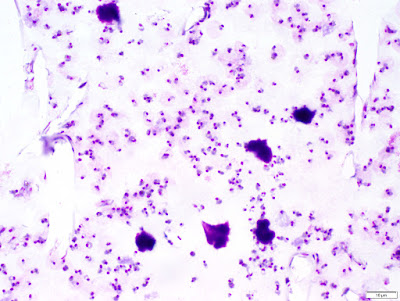 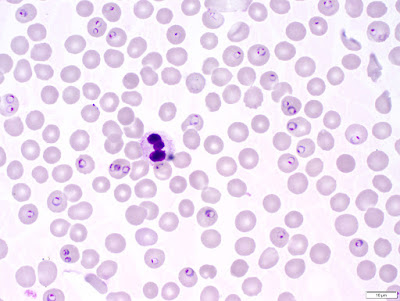 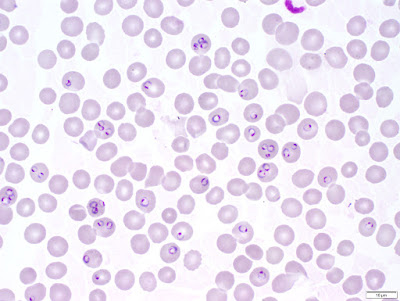 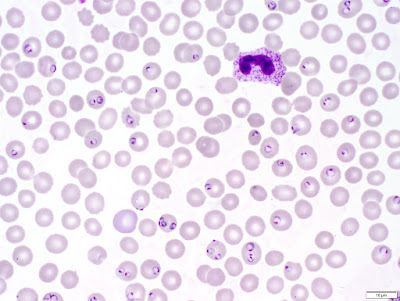 Identification?
Any thoughts on the percentage of parasitemia?
What should the laboratory do when seeing this?
Posted by ParasiteGal at 8:19 AM 19 comments:

Answer: Malaria due to Plasmodium falciparum; >20% parasitemia
There were lots of great suggestions for what the lab should do after making this identification. The step of primary importance is to urgently contact the clinical team to relay the result and ensure they understand the importance of the diagnosis. In my laboratory we treat all malaria diagnoses as critical results. In this case, the causative agent (P. falciparum) and the high parasitemia (>2%) make this call even more urgent, since the patient is at very high risk of death from his infection and requires immediate treatment.

In addition to antimalarial treatment (e.g. IV quinidine or artesunate), red blood cell exchange may also be performed for patients with >10 % parasitemia. While the United States Centers for Disease Control and Prevention (CDC) no longer recommends red cell exchange for severe malaria, many other groups such as the American Society for Apheresis (ASA) feel that it is still warranted in life-threatening infections such as this one. You can read the arguments for red blood cell exchange for malaria with >10% parasitemia here:

Thanks to everyone who wrote in on this case, and kudos to those who took the time to calculate the % parasitemia!

Posted by ParasiteGal at 5:31 PM No comments:

It's time for our monthly case from Idzi Potters and the Institute of Tropical Medicine, Antwerp. 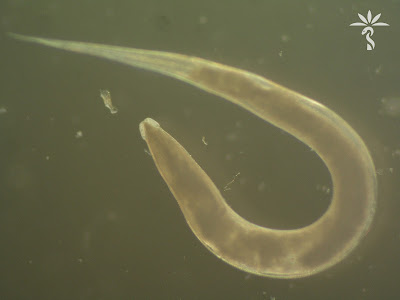 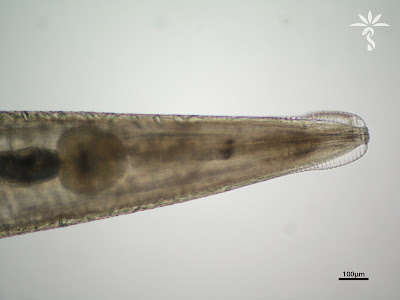 A direct wet mount was made from the stool sample. The structures that are found in the wet mount are shown in following image and videoclips. 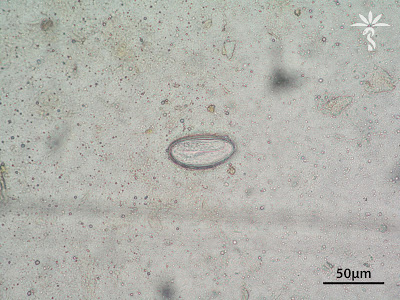 Check out these cool videos (you may need to press play twice)
Identification?

Answer: Enterobius vermicularis adult female and eggs (containing viable larvae). I hope you all got to see the beautiful video of 'baby's first steps' (or wriggles?) that Idzi provided showing a larva hatching from an egg.

The diagnostic features include prominent cervical alae, bulbous esophagus, pointed 'pin-like' tail, and "D" shaped eggs, with flattening on one side. 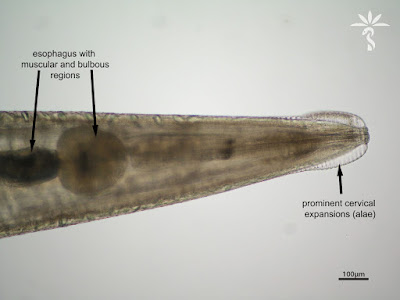 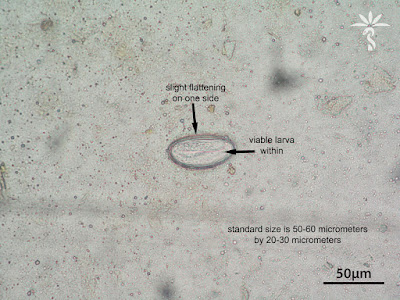 As Florida Fan mentioned, Blaine did a fabulous job replicating these eggs in his Halloween costume last year. 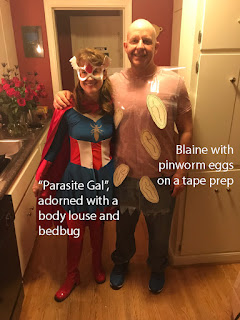 AND, he left some presents behind! 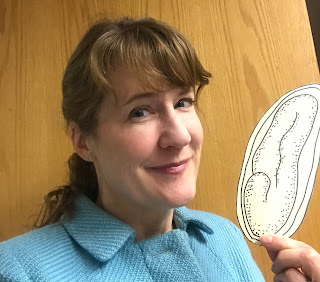 The following objects were seen on a thin blood smear that was made to evaluate a patient for malaria. No further history is available. Images courtesy of Emily Fernholz. 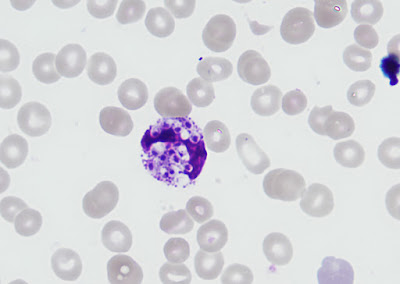 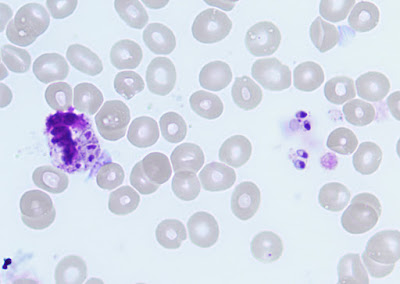 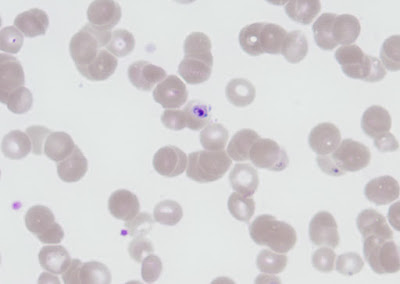