Answer: Trichuris trichiura, otherwise known as the "whipworm" due to its whip-like shape. Notice that this example is a gravid female, with clearly identifiable eggs inside the uterus. Congratulations to all of the viewers who wrote in - either on the blog or via email.

The second part of the question was a bit tricky, but DrJ got it correct:
"the whip is the anterior end, which seems backwards to me because I always thought of it as a tail." Most people get this wrong, since they tend to think of a worm body decreasing in diameter rather than increasing. However, it makes sense if you understand the life cycle of the adult female. The head is threaded into the mucosa of the large intestine, allowing the worm to feed on tissue secretions (best accomplished with a narrow anterior end). The posterior end is larger because it contains the gravid uterus, packed full of eggs. The adult female produces 2,000-20,000 eggs daily! Note that the posterior opening is wide enough to easily accommodate the release of these eggs. The images below nicely illustrate the anterior and posterior ends: 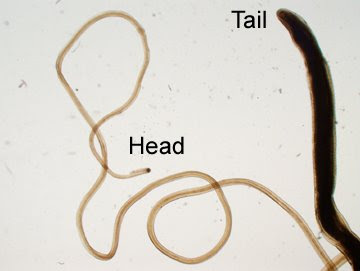 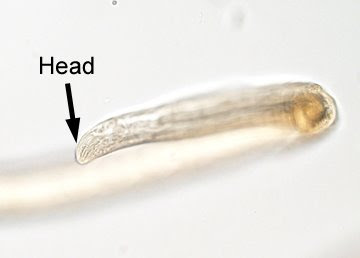 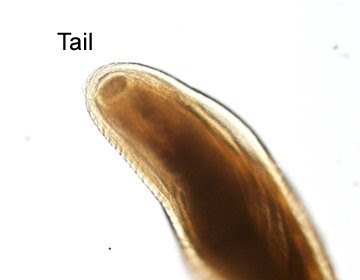 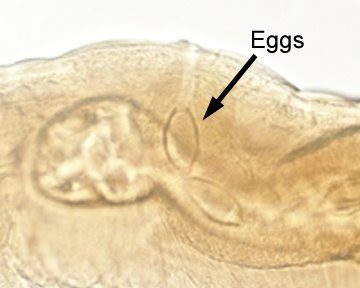 Finally, to answer one of the comments I received: I pronounce Trichuris: Try-cure-us (although I was trained in London so I tend to lean towards British pronunciations).
Posted by ParasiteGal at 9:56 PM

outstanding images, too
You should post a guide for dummies