The following were seen macroscopically in a duodenal aspirate. They range in length from 7 to 10 millimeters. 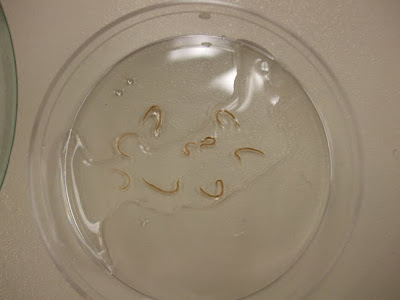 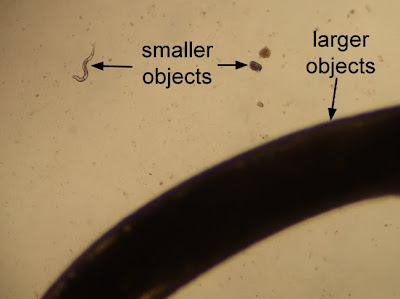 Using a 4x objective, the head and tail of the larger objects looked as follows:
Head: 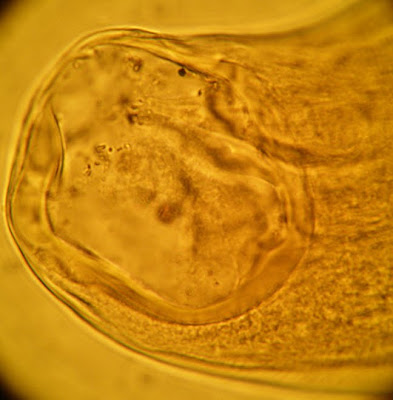 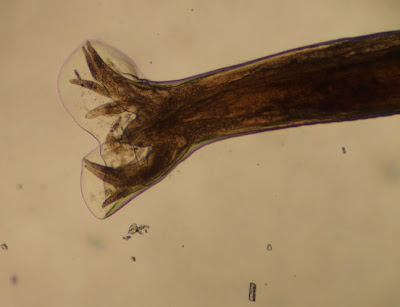 Higher magnification revealed that some of these small objects were moving!
Here's one that measures 60 micrometers in greatest dimension.


After some time, the following was observed: 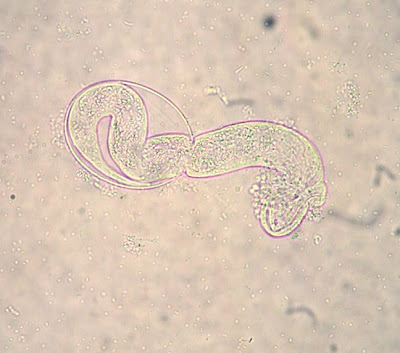 Here's one of the microscopic objects moving. It measures approximately 300 micrometers in length.


Identification?
What would happen if we plated the duodenal aspirate contents on an agar for Strongyloides stercoralis culture?
Posted by ParasiteGal at 1:09 PM

I think this is hookworm, favoring Ancylostoma.

I think this is Ostertagia ostertagi.

I am going to go with Necator americanus. bw in vt

Looks to be Necator americanus with adults in the first photo, eggs and first-stage larva in the second photo, cutting plates in the third photo, bursa of adult male in the fourth photo, followed by eggs and emerging larvae.

I feel like this is a trick question but if we plated the aspirate on agar then they should show furrows after some time. Not as well and as deep as Strongyloides but still detectable and more snake-like than whip-like.

Fantastic site! Thanks for this, makes pathology board studying a little better. Does anyone know of a similar site for Bacteriology or Virology?