Great discussion on this case!  Based on morphology (since I didn't provide an exposure history), most readers thought this was infection with either Plasmodium falciparum or Babesia spp.  Indeed, these are the top 2 parasites in the differential since both share the following features:
1.  The size of the infected RBC is not enlarged
2.  Parasite forms are limited to ring-shapes
3.  Ring forms are relatively small and delicate
4.  Multiply infected RBCs are present

What allows Babesia spp. to be differentiated from P. falciparum in this case, however, are the following features:
1. There is marked parasite pleomorphism, with spindled, oval, and round forms
2. There are more than 2 rings per RBC, which would be unusual for P. falciparum 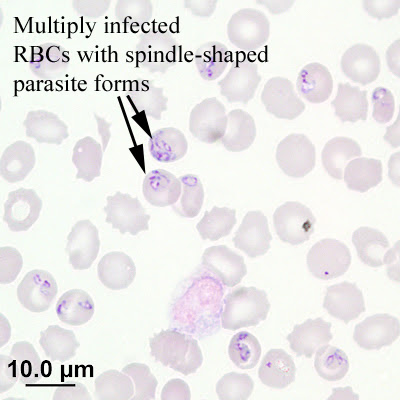 Other features that are helful for differentiating P. falciparum from Babesia (although not seen in this case) are tetrad forms (so-called "maltese crosses") and extracellular rings.  The former are diagnostic of babesiosis, but are rarely seen in clinical cases.

In this case, the patient unfortunately died of her disease.  Sequencing at the CDC later showed the species to be the MO-1 strain described recently in Missouri.
Posted by ParasiteGal at 3:30 PM