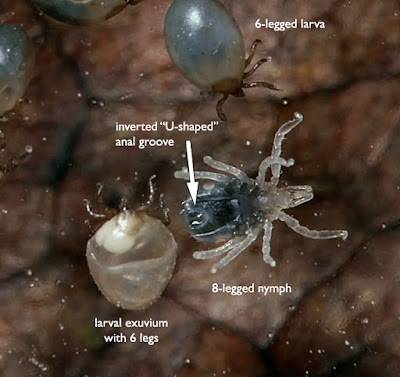 The gender is not possible to discern in nymphs, but as mentioned by Anon, it can be determined in adults by examining the scutum and basis capituli. The scutum (dorsal shield) of the female only covers a portion of the dorsal surface, compared to the male in which it covers nearly the entire dorsal surface. In the nymphal stage, both males and females have a similar-appearing scutum.  Also, only females have porose areas whereas males do not. The porose areas are located on either side of the basis capituli and produce antioxidants which are combined with waxy secretions from the Gene's organ. This substance is applied to eggs right after they are laid and serves as a protective coating. The porose areas also lubricate the Gene's organ, allowing it to expand and retract more easily.

Thanks again to Dr. Graham Hickling for donating this fascinating video. Thank you also to Dr. Robyn Nadolny for the additional information about the function of porose areas and Gene's organ. If you'd like to see the Gene's organ in action (and tick eggs being laid), check out this other amazing video by Graham.
Posted by ParasiteGal at 2:49 PM