As noted by Florida Fan, "we can clearly see the thread-like anterior portion and an inflated posterior, giving the worm resemblance to a whip". I always like to ask my students which end they think is anterior - they invariably (incorrectly) guess that it's the broader end! This gives me the opportunity to walk them through the life cycle and how the adult worms are embedded within the mucosa of the large bowel. It always seems to make more sense to them when I ask which end would be easier to thread into the wall of the bowel - the thin end or the thick end? This helps explain why the anterior end is thinner than the posterior. I also note that having a broader posterior end allows it to fill with eggs in the female worm, and these can then easily be shed into the intestinal lumen . I'm kind of old-fashioned, so my explanation is usually accompanied by some hand-drawn images. 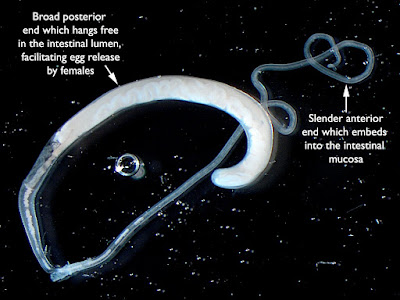 Florida Fan also noted another two other important morphologic features: the stichosome comprised of multiple stichocytes, and the immature ova within the uterus in the posterior end. The purpose of the stichosome is unclear, but it appears to serve a secretory function. It is found posterior to the esophagus and is quite prominent in some nematodes such as Trichuris species. 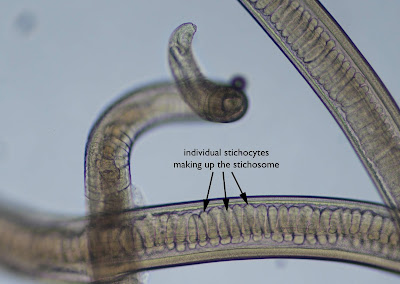 Check out the comments for a poem by Blaine referencing the dreaded complication of whipworm infection - rectal prolapse!
Posted by ParasiteGal at 4:33 PM