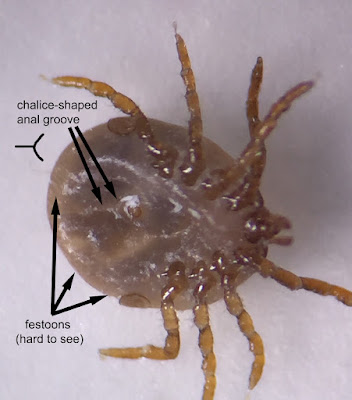 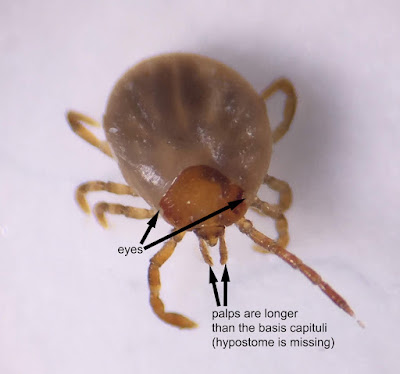 This constellation of features is consistent with an Amblyomma species. You would need to have a better view of the hypostome (absent in this case) and coxal spurs in order to make it to a species-level identification.

Old One made an interesting comment which I hadn't heard before: "The broken hypostome and chelicera hints at the possibility that this tick has long mouthparts that were cemented deep in the host's tissue. Ticks with shorter mouth parts (e.g. Dermacentor) cement at the surface of the skin, often leaving a skirt of cement attached to the capituli (may be confused as host skin) and often retain their mouthparts." He also noted "The high activity level of this tick is a characteristic seen in Amblyomma and even more so in its cousin Hyalomma. They are sometimes described as almost predatory. Literally one can hear them running through grass to get to their host (prey)." This is behavior I have witnessed first hand, and am dreading the day that Amblyomma americanum makes its way up into Minnesota!

If you are looking for resources on tick identification, you can start with some easy guides such as the ones that Blaine and I published (CAP arthropod bench reference guide, and our CMR article "Laboratory Identification of Arthropod Ectoparasites"). These contain references for species-specific keys as well. There is also a nice key in Lynn Garcia's text and the Manual of Clinical Microbiology chapter on arthropods. Georgia Southern University also has a fun interactive key that walks you though some of the main decision points for tick identification. Happy tick hunting!
Posted by ParasiteGal at 3:21 PM