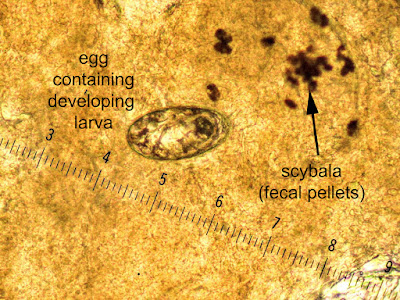 Old one nicely described the biology and morphology of these arthropods:


Sarcoptes scabei occur in a number of host species. Primarily in swine here in Minnesota but occasionally in humans. The male mites range in size from 213-285 μm long by 162-240 μm wide and the female mites range from 300-504 μm long to 230-420 μm wide. Sarcoptes are round to ovoid when viewed from the back; when viewed from the side they are ventrally flattened and dorsally rounded (similar to a turtle). They possess short stumpy legs, and have no internal or external respiration apparatus (stigmata or tracheae). The ventral surface contains a number of chitinized plates called apodemes, the dorsal surface is partially covered by wide-angled, V-shaped-spines (>). The cuticular surface is sculptured into numerous parallel ridges which superficially resemble human finger prints, and the anus is at the posterior end of the mite (this is the characteristic used to differentiate Sarcoptes from Notoedres which has a dorsal anus and sometimes infests humans) The morphology of the developmental stages of Sarcoptes varies. You can, however, differentiate the adult stages from other mite species using easily recognized characteristics. The last segment (tarsus) of legs 1, 2, and 4 on males and legs 1 and 2 on females have a long, unjointed empodium or stalk with a small sucker-like pad at its end. These stalks are diagnostic for Sarcoptes. You can see these suckered stalks in the wonderful video [in this case].

Here are some images from previous cases that show some of these features: 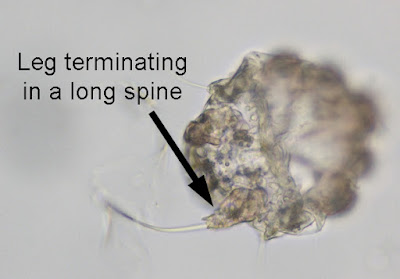 Mite shown in cross-section within the stratum corneum in a hematoxylin and eosin (H&E) stained tissue: 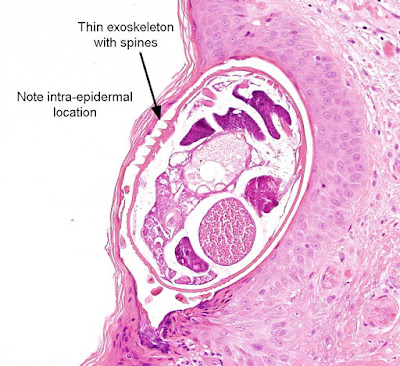 As noted by Bernardino Rocha, the scabies mite is an efficient miner. That's a neat way to think about this interesting arthropod. Sarcoptes scabei spend their entire lifecycle on or in their human host. The female burrows into the outer most layer of the epidermis (the stratum corneum) to create a short burrow called a molting pouch. The male penetrates this pouch and mates with the female. Interestingly, a female only mates once, and then remains fertile for the rest of her life. She leaves the molting pouch after mating to find another suitable location to create a permanent burrow.  Bernardino further notes that "dispersed along the burrows are eggs, hatched larvae, and excrements."

According to the CDC, "Scabies mites generally do not survive more than 2 to 3 days away from human skin." However, the mite in this case was still 'alive and kicking' 5 days after collection, so clearly there is a range in the survival time away from the host, which may have important implications for scabies prevention and control measures.

I'll leave you all with this lovely poem from Blaine Mathison:

You go to the doctor when your groin starts to itch
so he scraps some of your skin into a petri dish
and after a thorough microscopic examination
he tells you scabies is the cause of your sensation
to which you reply, 'Son of a ...'
Posted by ParasiteGal at 1:09 PM

Some acari have some amazing off host life spans. Willy Burgdorfer tells the story of his pet soft tick. It lived 32 years unfed in an ointment can on his desk. He would give it a drop of water once a year when he checked for life.

Old One,
This is incredible yet true! The scabies of this case were still moving on the eight day as seen last.
After April 30, 1975 we were in short supply of medical supply and to add insult to misery, there was an outbreak of scabies. We boiled a saturated solution of calcium hydroxide and pulverized sulfur. The product is a smelly amber liquid which is highly effective to the treatment of scabies when applied topically.
I learned this from Dr. Nguyen An Cu.
Florida Fan

Then again, some of the old remedies are still good. My wife was just effectively treated with acupuncture for a muscle spasm that defied modern medicine.