Answer to Parasite Case of the Week 554: Babesia species. Without a travel history, the differential diagnosis includes Plasmodium falciparum malaria given that only ring forms are seen and there is a high parasitemia; however, the following features are supportive of babesiosis:
1. Multiple (4) small forms within a single cell that are not a clear schizont form of Plasmodium.
2. Easily-identified extracellular forms.
3. Lack of malaria pigment 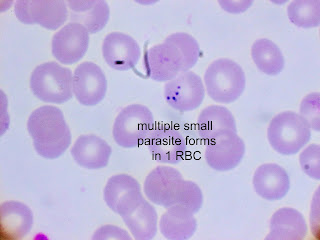 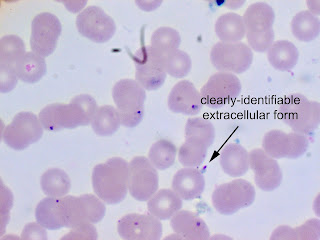 As Blaine mentioned, the rings are not thin and delicate as would normally be seen with P. falciparum infection. While thicker rings are commonly seen in 'older' blood (i.e., blood that was >24 hours old), we would expect to see malaria pigment in these cases, and none is seen in this case.

One reader was favoring babesiosis, but was swayed from this diagnosis by the lack of maltese cross (tetrad) forms. However, it's important to note that most cases of babesiosis will NOT have maltese cross forms. Instead, the diagnosis must be made on the other features listed above, in addition to the commonly-seen pleomorphism of the parasite forms in babesiosis. Interestingly there wasn't a lot of pleomorphism in this case.

Thanks again to Florida Fan for donating this informative case. It reinforces the need to get a travel history whenever possible (he later learned that the patient had not traveled outside of the United States), and to consider both babesiosis and malaria in the differential when seeing intraerythrocytic parasites.
Posted by ParasiteGal at 9:40 PM