As noted by Florida Fan, the notched tail is clearly shown in this case. Indeed, this is the best example I've ever seen. The notched tail can be used to differentiate the L3 larvae of S. stercoralis with those of hookworm (the latter has a pointed tail). 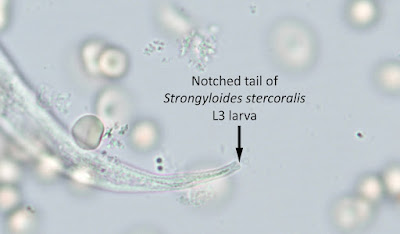 Old One also pointed out that the filariform esophagus reaches to the midpoint of the S. stercoralis L3 larva. In comparison, the esophagus only reaches to ~1/3 of the hookworm L3 larva. (The CDC has a nice schematic of these differences which you can view HERE.) I can't tell if the background cells in the current case are eosinophils, but peripheral and local eosinophilia are common features of strongyloidiasis.

BW in VT noted that the patient may have acquired infection years ago, and maintained infection via ongoing autoinfection. This is an important component of the S. stercoralis life cycle, as it allows for infection to persist for decades. Should the patient become immunocompromised, the ongoing infection can produce a hyperinfection state, leading to severe morbidity and possible death.

Posted by ParasiteGal at 2:00 PM