Answer to Parasite Case of the Week 586: Mushroom spores. Not a parasite.

As many of you pointed out, mushroom spores are a challenging parasite mimic, resembling hookworm eggs, Cystoisospora belli oocysts, and Giardia cysts. Fortunately, you can rule out the first two based on the small small size of these objects (20 micrometers long), whereas G. duodenalis can be ruled out by the lack of internal structures (e.g., nuclei, axoneme, median bodies). Two other viewers initially thought there was a lateral spine present (indicating Schistosoma mansoni) but later realized it was just an artifact. 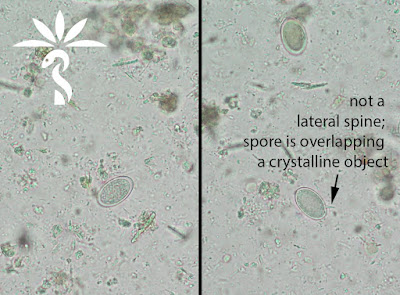 Florida Fan pointed out that I had previously shown a case of mushroom (morel) spores in May of 2019 (Parasite Case of the Week 544). Great memory Florida Fan! That case showed mushroom spores within an ascus, which was a fun twist.

Florida Fan also mentioned that Spring is here at our door, and now is the time to go out and hunt for mushrooms - something that can be done while social distancing! I hope you and your families are all staying safe (and sane) during this challenging time.