Answer to Parasite Case of the Week 589: Iodamoeba buetschlii cysts and trophozoites.

Note that the trophozoites and cysts have a single nucleus with a large, often eccentric, karyosome. Cysts characteristically have a large glycogen-filled cytoplasmic vacuole that is highlighted when using iodine on a wet mount preparation. The glycogen vacuole does not stain with trichrome or iron hematoxylin, and instead appears as an empty space as in this case: 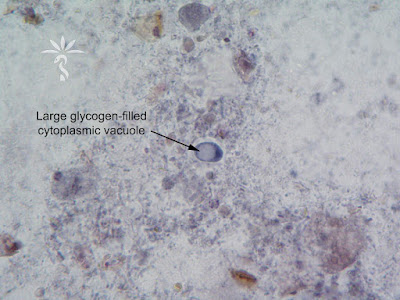 This organism gets its genus name from its iodine staining property (iod + amoeba), whereas the species name honors the German protistologist, Johann Adam Otto Bütschli. Note that the term "buetschlii" is used when citing a formal scientific name rather than "bütschlii" as per nomenclature standards.

Blaine pointed out there there were also some Blastocystis along for the ride (or vice versa): 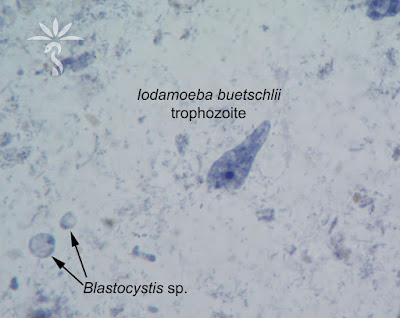 Old One also noted that the large vacuole looks a bit like a mask, which is a good reminder to wear a mask when going out in public to protect others around you.
Posted by ParasiteGal at 10:30 AM