Answer to Parasite Case of the Week 605: Earthworm, an oligochaete. As a segmented annelid, these worms usually have a few setae (i.e., bristles) on their outer body surface, as seen in this case, which aid in their identification, and differentiation from large parasitic worms such as Ascaris lumbricoides. 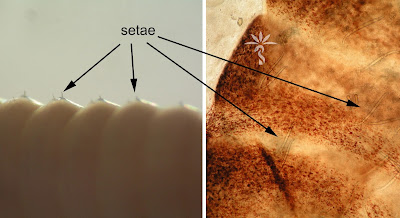 As so nicely stated by Florida Fan, "Did we say “after the bowel movement”? Good thing the patient did not pass it out. Yes, we have seen this annelid a few times. (See Case 545, Case 344, and Case 234). It always shows the locomotive spicules on each ring of the body. A diligent, hardworking creature, it bores it tunnels through the rich loam most often ignored by most, it aerates its living Earth. Gardeners prize it for its urine and pellets, fisherman love it as their succulent wiggling bait irresistible to passing fish. Yet the humble night crawler got its place in French poetry in the poem “Le lombric’’. One time, I was formally complained to the medical director for signing the report as ‘’earth worm’’, the sample was referred to the State Laboratory where it was confirmed as being a Lumbricus terrestris. Yes this harmless worm can give a panic to a few caring parents. Well, long story short I should stop before being reprimanded for being ‘’Le Grand Bavard’’."

Don't worry Florida Fan - we will not accuse you of being a big talker, as we greatly appreciate your stories and descriptions!

Now to answer the question that one reader raised on Twitter - how did it get into the toilet? My plumber friend tells me that tree roots are the enemy of household pipes. Over time, the roots grow into pipes, leading to cracks and fissures through which our earth-living friends can enter. The video in this case can show how earthworms can be vigorous swimmers. They can easily swim 'upstream' to enter our toilets, and then be mistaken as a parasite of concern.

So let's end with some levity, starting with the wonderful age-old joke from Old One:

Florida Fan: "Hey Old One are you going fishing?".

And a poem from Blaine Mathison:

To see a worm wiggling in a toilet bowl

would certainly on anyone take its toll

but there's nothing to fear

for it didn't come out your rear

but a crack in your pipes allowed contamination from the soil!

For those of you who would like a more serious poem (with no offense to Blaine's), Florida Fan and Sir Galahad remind us of the poem by Jacques Roubaud, "Le lombric" (the Earthworm). You can find a passable translation HERE.

Posted by ParasiteGal at 7:58 PM