Answer to the Parasite Case of the Week 624: Toxocara sp. eggs. Note that one is fully embryonated and contains an L3 larva. These eggs are found in the feces of the definitive hosts: T. canis in canids and T. cati in felids. Based on the size, the eggs in this case of likely to be those of T. canis, which is slightly small than the eggs of T. cati (80-85 vs 65-75 microns respectively). Of note, these eggs are NOT found in human feces. However, they are a risk to humans if ingested, since eggs with larvae will hatch and can cause visceral larva migrans. That is why finding eggs in the soil of a child's playground is particularly concerning.

The eggs can be identified by their thick outer shell with a pitted surface. It's a very striking appearance. 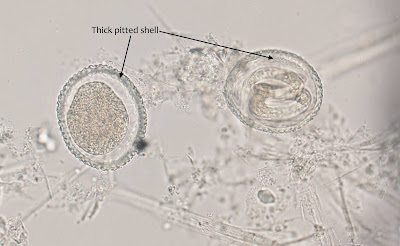 You can read more about these fascinating zoonotic parasites on the U.S. Centers for Disease Control and Prevention (CDC) DPDx website. Toxocariasis is identified by the CDC as one of 5 Neglected Parasitic Infections in the United States, and is quite prevalent in many places worldwide.

Posted by ParasiteGal at 3:51 PM