Answer to Parasite Case of the Week 629: hookworm ova - either Ancylostoma duodenale or Necator americanus.

As stated well by Sam, "Finally! An end to the "is this hookworm?" trilogy. Haha 😁"  You can see a couple of good examples of hookworm egg mimics in my last two cases.

He and TheOracle also noted that the second image had Charcot-Leyden crystals, a breakdown product of eosinophils: 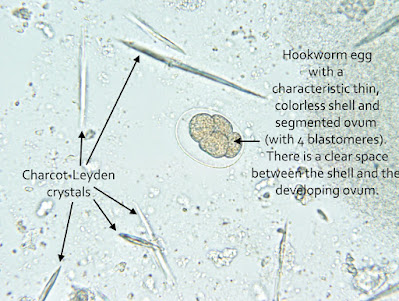 Idzi commented that "If you would ask for the "most-likely" identification, I'd dare guessing "Ancylostoma duodenale" - not per sé due to the fact that the patient is from the African continent (as migration and travel have mixed A.duodenale and N. americanus geographically up), but the second picture shows an egg with a very low number of blastomeres (only 4!). This low level of cleavage in freshly produced feces is more typical for A. duodenale. Necator usually has "already" about 8 blastomeres in freshly passed feces. That being said, I'd still report this as hookworm ova..."

Lastly, Sarah astutely commented on my Facebook ParasiteWonders page that this was "Probably hookworm, but I feel like this is a trick problem and I wouldn’t be discounting Oesophagostomum—they’re also pretty barrel shaped which is suspicious for Oes."  I love the healthy skepticism! I have certainly been known to post 'trick' cases. The parasite that Sarah mentioned, Oesophagostomum, is a nematode in the family Strongylidae that is found in tropical settings across several continents. Most human cases are found in Togo and Ghana and are due to O. bifurcum. However, cases have also been reported from Ethiopia where this patient was from. The eggs of Oesophagostomum are found in stool and are indistinguishable from those of the human hookworms; therefore we need to consider Oesophagostomum in the differential diagnosis. Often a presumptive diagnosis of Oesophagostum sp. infection can be made on clinical grounds, as infected patients usually present with nodular intestinal/abdominal disease caused by developing larvae in the intestinal wall. Another feature that is helpful in the differential diagnosis is that the eggs of O. bifurcum are usually at a later stage of cleavage than hookworm species when shed in stool, so seeing an egg with only 4 blastomeres would be unlikely.

Posted by ParasiteGal at 8:22 AM