Answer to Case of the Week 537: Echinococcus species

Shown here are the classic protoscoleces of Echinococcus, each with a rostellum containing a row of hooklets (i.e. an 'armed' rostellum). The rostellum is the anterior protrusion found on some tapeworms. 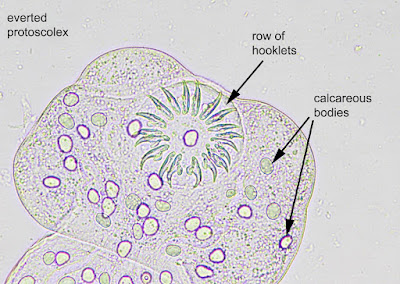 As Old One mentioned, "There are 4 species of Echinococcus that infect humans: E. granulosus, E. multilocularis, E. vogeli, and E. oligarthus. Without more information such as host location, medical imaging, measurement of rostellar hooklets, one cannot be certain of the species. However one can make an educated guess.

E. multilocularis cysts are [usually] sterile (no protoscoleces) [in humans], E. oligarthus is exceedingly rare in humans, E. vogeli photoscoleces contain very few calcareous corpuscles, leaving E. granulosus as the best guess."  I will also add that infections with E. oligarthus or E. vogeli are extremely uncommon in humans and occur in Central and South America. E. granulosus is, by far, the most common species causing human infection in the United States, and causes a form of disease called cystic echinococcus. Usually a single cyst is produced, within which multiple daughter cysts may develop. In comparison, E. multilocularis causes alveolar echinococcus which infiltrates normal host tissue without remaining confined to a single cyst.

I did not provide enough clinical or epidemiologic information to provide a species level ID. However, in this case, we also believe that E. granulosus was the most likely identification.

Posted by ParasiteGal at 3:45 PM

Hello Guys.Have you heard about programmed ATM card? We have special cash loaded programmed ATM card for you to start up your own business. Our ATM card can be used to withdraw cash at any ATM or swipe, stores and POS. Our card has daily withdrawal limit depending on the card you order. Contact us now to know our card balance and cost.
CONTACT DETAILS
Email/nashwilliams4@gmail.com
whatsapp/+2349057353987