Answer to the Parasite Case of the Week 689:  Anisakid, most consistent with an Anisakis species.

Hopefully you all had a change to look at the whole slide image HERE. From its location in the small intestine, deep in the submucosa, one can envision how it may have extended through the wall of the intestine and caused a perforation.

Dr. Luca Fanasca noted that "we can clearly see features consistent with an anisakid infection: multilayered cuticle (from a portion which seems detached, in the upper part), polymyarian muscle cells, the beautiful Y shaped lateral chords and the banana-shaped excretory cell. From the quite slender appearance of the lateral cords I think we could suppose this is actually an Anisakis sp., but a definitive identification would require the observation of other characteristics like the caecum position and shape, or molecular diagnostics strategies." 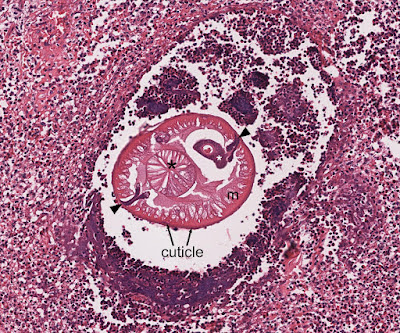 Below are some of the key features of nematodes, and anisakids in particular:

Features of all nematodes:

Features of anisakids in particular:

Posted by ParasiteGal at 1:00 PM

Many thanks for this very comprehensive explanation Dr. Pritt!