Although larvae in a respiratory specimen could be due to a number of different organisms, including hookworm, Ascaris, and Strongyloides, the overall length of the worm and clinical history were most consistent with Strongyloides.

The larvae may be identified by morphologic exam on stool or sputum, as well as by stool culture and concentration methods. Culture has been shown to be the most sensitive, and should be considered when there is a suspicion of strongyloidiasis. For culture, a stool or respiratory specimen containing bacteria is placed on an agar plate and incubated. A clear or blood agar can be used. The larvae will move through the agar, dragging the bacteria along with them, creating the macroscopic tracks that are visible in this case (below). Note that other worms, including hookworm, will also cause this phenomenon. 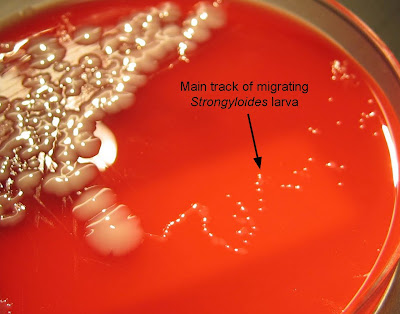 This amazing case further emphasizes the potential infectious nature of all human specimens that are submitted to the laboratory. Both the shell vial and the bacterial agar plate shown here contain infectious larvae that could penetrate intact skin and cause human infection. For this reason, it is important for all microbiologists to be familiar with the appearance of Strongyloides tracks and larvae and use appropriate infection control measures. Thanks again to Dr. Donald Jungkind for sharing this unusual case!
Posted by ParasiteGal at 8:36 AM