This was a tough case, with lots of different responses offered by viewers.  The presence of a worm cross-section in the superior rectus muscle rightly calls to mind diagnoses of trichinellosis and cysticercosis.  However, the round aspect of the worm supports the diagnosis of a nematode, while the relatively large size, lack of a nurse cell, surrounding necrosis, and worm morphology (including diagnostic internal cuticular ridges) are consistent with the diagnosis of Dirofilaria sp.  This filarial worm, commonly known as the dog heart worm, can cause a self-limited infection in humans with pulmonary and subcutaneous masses.  Infection is transmitted through the bite of a mosquito and is more common in the southeastern U.S., although a handful of cases are reported in the upper midwest each year.  Another reason to apply DEET and avoid mosquito bites this summer!

Internal cuticular ridges are shown by the arrows below.  Note the surrounding necrosis (top image) and necrotizing granuloma (bottomw image). 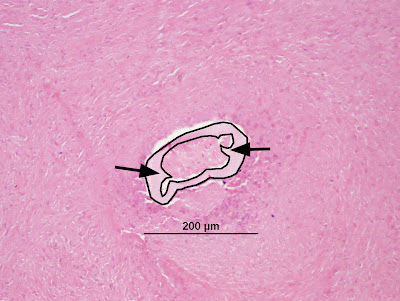 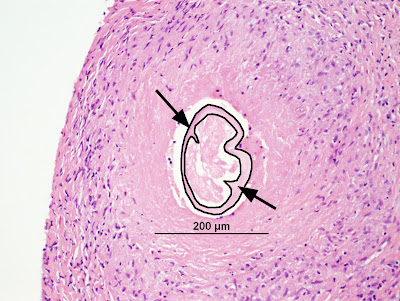 Posted by ParasiteGal at 9:36 PM

Great case! Hopefully we get a new case in this week.