Thanks to everyone who wrote in with the response - you were all correct.  Blastocystis is most commonly present in stool as cysts (vacuolated forms/central-body forms) which contain a large central body similar to a vacuole and up to 4 peripheral nuclei.  As mentioned by Florida Fan, they range in size from 5 to 20 (or even 30) micrometers in diameter, although the usual range is 8-10 micrometers. 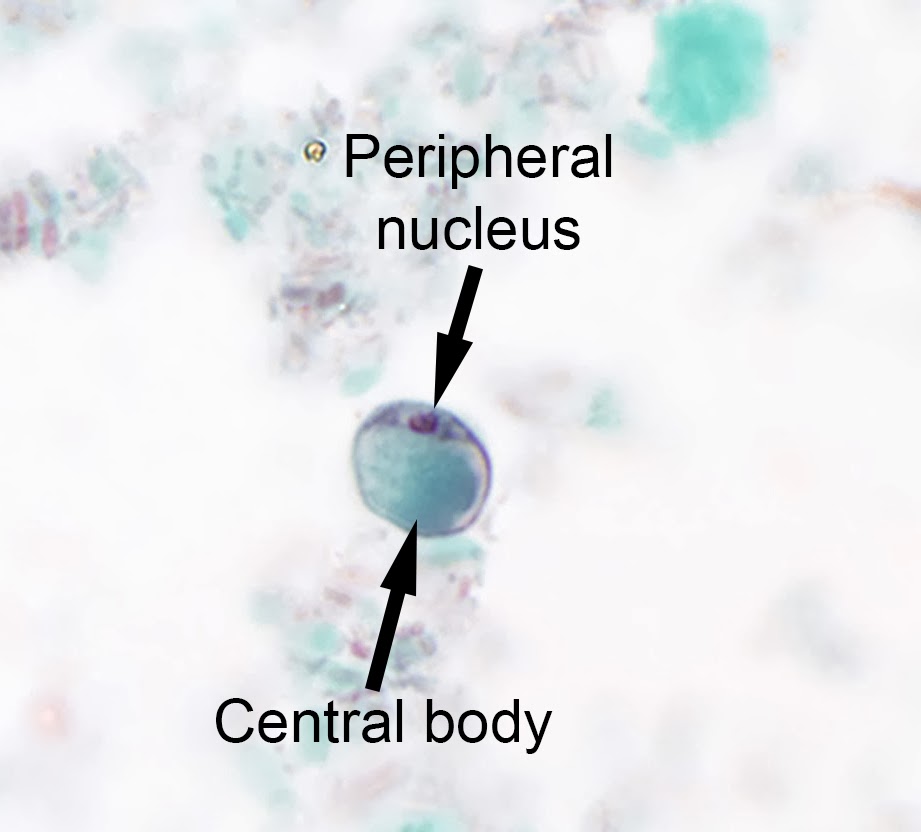 There were a number of comments/questions about the Blastocystis subtype and how that might be linked to the patient's symptoms. At this time, the role of this protozoan parasite as a human pathogen is somewhat controversial, but it does seem that certain subtypes are more common and may be associated with clinical symptoms.  Therefore, the general trend in the U.S. is to treat symptomatic patients when no other cause of symptoms is found.  In this case, numerous stool exams did not reveal any other parasites and the patient was treated with metronidazole with some improvement. Unfortunately we don't know the subtype of this infection since that testing is not readily available for clinical laboratories.

For those of you who are interested in learning more about Blastocystis, I highly recommend the blog by Christen Run Stensvold (http://www.blastocystis.net).  He regularly highlights new literature on this organism and discusses facets of this parasite's biology in much more detail than I could!


And now a poem by Blaine Mathison:
Blastocystis is such the taxonomic conundrum
spinning protozoologists around 'til their minds go numb
among the amoebae it's called its home
even as an alga it's once been known
but now a stramenopile, 'til what other theories may come
Posted by ParasiteGal at 8:23 AM