There are several key morphologic features that allow for identification of this specimen. First, the presence of loose, 'myxoid' stroma, thick acellular cuticle and calcareous corpuscles allow for general identification as a cestode; in this case, a proglottid. 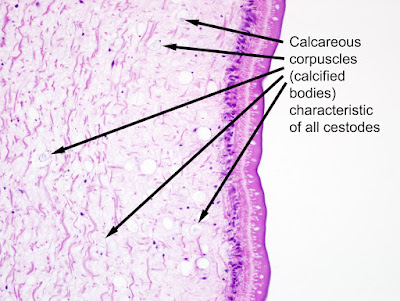 Next, identification of the small eggs with radial striations allow for further confirmation that this is a cestode, and identification to the Taenia genus. 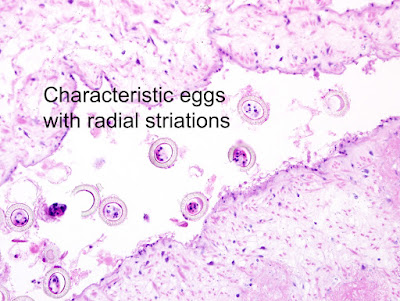 Finally, the species can be tentatively identified as T. saginata, based on the presence of >13 primary branches (arrow heads) off of the central uterine stem (arrow). 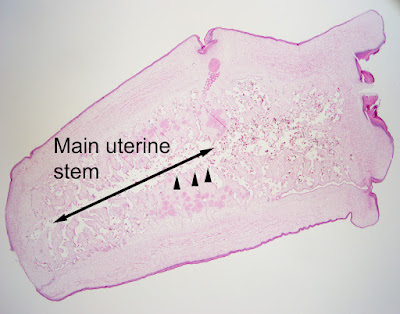 Florida Fan noted that T. asiatica also has > 13 primary uterine branches and is essentially indistinguishable from T. saginata. However, Arthur rightly mentions that T. asiatica has not been described outside of Asia, presumably due to somewhat unique culinary habits of some Asian populations that include consumption of raw pig liver. Given that this patient was from Central America, she likely did not have exposure to T. asiatica, although we would need to perform molecular testing on the specimen to definitely rule out this species.

Posted by ParasiteGal at 1:40 PM

I am just wondering where (in your opinion) is the best place for me to have lab testing/ see a parasitologist about diagnosis? I have been sick for 2 years after extensive travel, and it has been thought that I have some parasite/ I had tapeworm previously... I have had ivermectin treatment (1 dose) and 5 days of albendazole. However, I was sick for 2 years straight before this treatment. It helped a little... Still, no actual diagnosis.I also took 2 (10 day) 1,000 mg doses of metronidazole. I am thinking maybe I need praziquantel, but no one wants to prescribe it because the infectious disease doctors think that liver fluke is always killed by albendazole. (I have read otherwise in medical literature.) Doctors speculate that this might be what I am experiencing because my bile ducts are dilated. Also, my gallbladder went bad, and was removed. (Pathology testing didn't come up with anything.) Any recommendations for where to send my stool sample/ who tests for not only parasites, but protazoa etc? I am sure I have some parasite, but I am only always tested for very general kinds. I have lived in South East Asia, the bush of Southern Mozambique, Palestine, and many other places. Once in a while, I still see larva in my stool... I have gastroparesis, interstitial cystitis, autonomic dysfunction now... I know it is from a parasite, because this all started with vomiting etc after eating raw pork. Another thought I had was... trichinosis. Where would muscle be tested for this? I also have been dxed with fibromyalgia, which I think is bizarre. When all of this happened, I also had all over body/ anal itching for 6 months straight. Thanks again, Crystal ctrigaux@gmail.com

Hi Crystal,
I would recommend asking for a referral to, or directly visiting, an infectious disease specialist that specializes in travel medicine. Most large academic medical centers have a travel clinic, so that might be a good place to start. Best wishes, Bobbi

Yes, I have seen 2 infectious disease specialists. The one said I might have liver flukes, but didnt know how to DX (at Harvard.) Another said they thought I had a blood parasite (but also said those "Don't show up often on blood tests.") So, everyone just keeps leaving me with no help. The latter Dr was from Cleveland Clinic. I want a REAL infectious disease person that actually knows something about parasites. It seems that most ID travel medicine doctors know NOTHING in the US. You are more knowledgeable than any ID doctor whom I've talked to. I traveled 12 hours just to see one at Harvard, and they said they "only deal with viruses."

Hi Crystal, unfortunately I work in the laboratory and don't see patients. It sounds like you have seen a lot of folks who don't specialize in travel/tropical medicine. That is why I think that seeing a physician at a travel clinic would be best. They should be very knowledgeable about parasites. Best wishe for your recovery. Bobbi

The greater part of critics are parasites, who, if nothing had been written, would find nothing to write. See the link below for more info.