This case shows an adult worm containing characteristic eggs of C. philippinensis. Note that each egg has a striated wall and bipolar plugs. 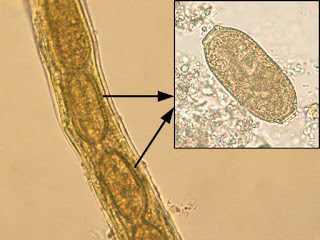 Thanks to the CDC DPDx for the photo of the egg shown in the upper right hand corner of the above image.

One reader asked how you could tell C. philippinensis apart from C. hepatica, since both can infect humans. The biggest clue in this case is that the worm was found in stool, whereas the adult worms of C. hepatica are only found in the liver. There are also subtle features of the adult worm and eggs that allow the 2 species to be differentiated.

Thanks again to Mr. Huot for donating a case that we don't get to see very often in the United States.

Posted by ParasiteGal at 9:33 PM