Kudos to those of you who saw both the eggs and the adults! I realize that many parasitologists are not used to seeing formalin-fixed paraffin-embedded tissue sections, so here is an overview of the tissue and the primary findings: 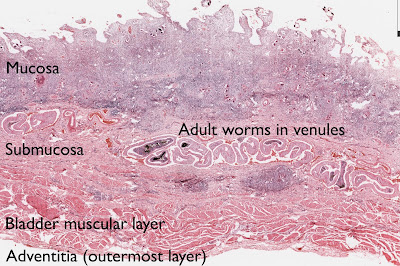 This full-thickness section of bladder wall shows a very inflamed mucosa (epithelium and lamina propria) with numerous Schistosoma eggs. Most pathologists would immediately pick out the eggs - each with a thin outer shell and internal miracidium. 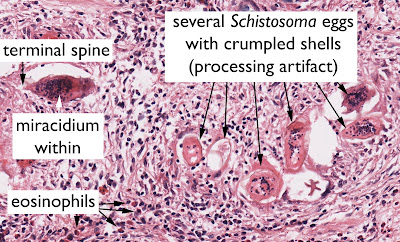 However, what many may not have noticed was that the culprits of this disease were also in the picture! Adult male and female schistosomes were residing within the bladder venules and can be seen in this section. As Old One mentioned, "The embrace (thanks eob) of the female by the male is unique to the "Schistos" for a couple reasons. Schistosomes derives from Greek meaning split of cleft body. This particular cleft is a split between male and female reproductive organs, making it dioecious (separate sexes) where other flukes are monoecious (both sexes in one individual). The small size of female to male is the second unique feature. This allows the female to break the embrace and swim down the smaller capillaries to deposit its eggs closer to the mucosal surface than if it were in a bulkier monoecious form, thereby being closer to the external environment. Improving the survival of the egg." Fascinating biology! I was told by one of my instructors years ago that the female usually came back to the same male after her egg-laying, but if she encountered another available male on her way back, she may stay with him instead (!)

Here are some cross-sections of our schisto couple - the male forming the outer part of the 'embrace' and the female being on the inside. Another one of my microbiology instructors likened this relationship to a hot dog and a bun. The male is the bun and the female is the hot dog. 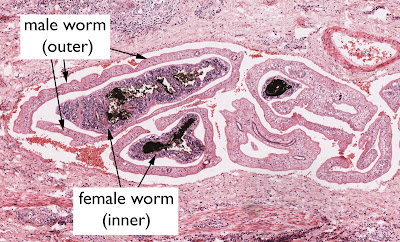 The black pigment within the female is hemozoin formed through breakdown of the ingested host hemoglobin. This is the only parasite other than Plasmodium to form hemazoin pigment in humans. Nine years ago I posted a CASE of the male and female worms together which may help you better visualize their configuration.
Posted by ParasiteGal at 9:47 PM

Woooaaaw! Thanks Dr. Pritt!
I usually do not comment on cut-worm-cases as my experience in this is very very limited.
So many thanks for this very educational and exceptional case! Also thanks for the nice fact about the hemozoin; I didn’t know that one!

What a case!!! Yes, me too, thank you for a very detailed lesson. This is where I go to be schooled.
Parasitology is a field that most "microbiologists abhore and are terrified. "When will they ever learn, when will they ever learn...".
Thank you Dr. Pritt for your teaching, I will do my part spreading the knowledge as it has been said:" Je sème à tous vents".
Your Fan in Florida.