Answer to the Parasite Case of the Week 613: Loa loa microfilariae

Although some readers suggested that these structures could be artifacts (e.g. fibers that got onto the blood films), we can tell that these are microfilariae by the size, shape and presence of nuclei within the worms. The tail nuclei weren't entirely visible in the images, so I gave the hint that the nuclei go all the way to the tip of the tail. That leaves us with just 2 microfilariae to consider: Loa loa and Mansonella perstans.

As nicely described by Idzi, the size of the microfilariae is the most important feature for differentiating these two: "Mansonella is ruled out by its thickness. A nice trick is to compare the diameter of the microfilaria to the nuclei of the white blood cells. Mansonella would be half of the WBC nuclei’s diameter while the others are more or less the same."  Loa loa microfilariae are also sheathed, whereas those of M. perstans are not. Unfortunately, it is not always possible to see the sheath of Loa loa (as well as Wuchereria bancrofti) on Giemsa-stained blood films.

Florida Fan offered up a very nice example of where the sheath is visible: 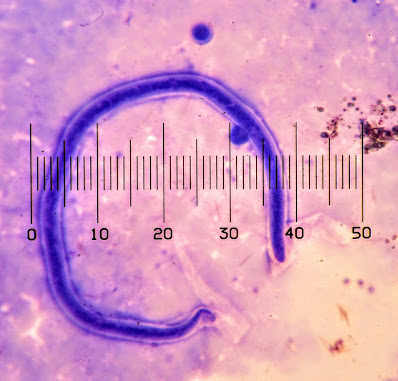 You can see the sheath extend from the tip of the tail, up towards the "20" of the scale bar.

If you have your heart set on seeing the sheath, another neat trick you can use it to stain your blood films with hematoxylin. The Delafield's hematoxylin protocol is usually recommended for this purpose, but the routine hematoxylin and eosin (H&E) stain in your anatomic pathology lab will also do in a pinch. Here are some microfilariae images from this case using H&E staining - what a beautiful sheath! 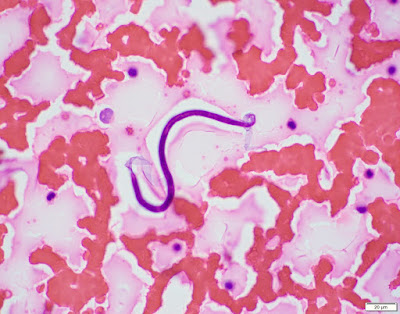 Some also appeared as negative outlines: 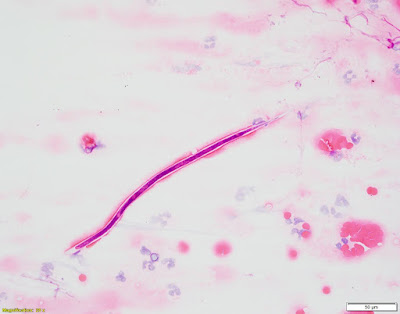 Thanks again to Dr. Ryan Relich (a.k.a. MicrobeMan) for donating this case.

Posted by ParasiteGal at 8:37 PM