Answer to Parasite Case of the Week 614: Cystic echinococcosis caused by a member of the Echincoccus granulosus complex.

As Clinton White nicely explained in the case comments, "We now know that human infection is caused by several species and genotypes within what was once thought of as a single species." The species implicated in human disease are E. granulosus (genotypes G1-G3), E. ortleppi (G5), and E. canadensis (G6-G8, G10). Most of these have a wide geographic distribution, including regions of North America, Europe, Asia, and the Middle East. In South America, 2 additional species cause neotropical cystic echinococcosis, E. vogeli and E. oligarthra. Echinococcus multilocularis causes a very different form of disease called alveolar echinococcosis. Unlike the species that cause cystic echinococcosis, E. multilocularis expands throughout the tissue in an infiltrative pattern, much like a malignancy, forming microscopic and macroscopic cysts without a well-defined surrounding laminated layer. Protoscolices are rarely seen in human E. multilocularis infections.

Molecular analysis, as well as correlation with the radiologic findings and the patient's exposure/travel history are used to determine the causative species. In this case, the patient had not travelled outside of North America and had a single pulmonary cyst, consistent with a diagnosis of simple cystic echinococcus (CE; CE1 on the World Health Organization classification scale).

This case shows characteristic protoscolices and free hooklets of E. granulosus complex. The hooklets are especially beautiful with Wheatley's trichrome staining, in which they have a somewhat iridescent appearance: 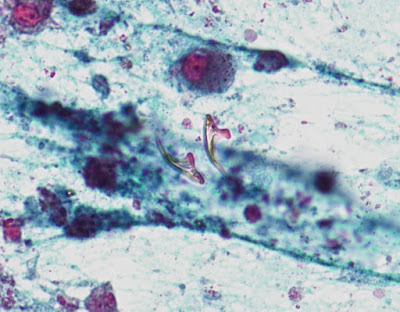 Posted by ParasiteGal at 1:17 PM