PCR testing confirmed that this was P. knowlesi infection!

This interesting case highlights the difficulty in diagnosing P. knowlesi infection, given that many of its key morphologic features in humans overlap with those of P. falciparum and P. malariae. Like P. falciparum, high parasitemias may be observed, and thin delicate rings - occasionally with double chromatin dots ("headphone" forms) and applique forms - may be seen. Conversely, all stages of P. knowlesi are commonly seen in peripheral blood, unlike most cases of P. falciparum, so that late stage trophozoites and schizonts are also seen. Many of these later stage forms resemble those of P. malariae, such as "band form" late stage trophozoites. Of note, P. malariae does not reach high levels of parasitemia (1% would be unexpectedly high). 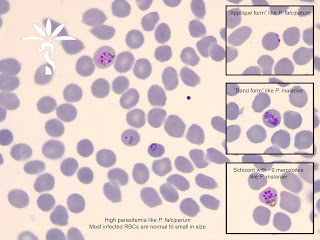 Given this complexity, PCR confirmation is important for understanding the nature of infection and guiding therapy.

Posted by ParasiteGal at 1:13 PM

Thank You very much for this interesting case and nice photos ! P. knowlesii infection is also emerging in Hungary - I mean the possibility of important cases. And we have no practice and not easy to find literature. It was joyful and very useful for my collegues and me. Lot of thanks!