You can place these mosquito larvae in the Culicinae subfamily due to the presence of respiratory siphons that allow them to hang below the water at an angle and breathe the oxygen above: 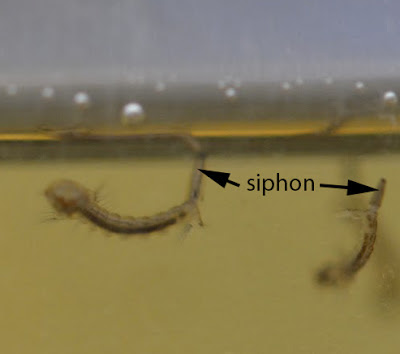 This is in contrast to anopheline mosquitoes (Anophelinae subfamily) who do not have a respiratory siphon and instead rest parallel to the surface of the water, breathing through their tail.

The Culicinae subfamily includes the genera Aedes, Culex, and Culiseta.  Different species in these genera transmit a number of viruses and parasites, including yellow fever, dengue, West Nile virus, Eastern equine encephalomyelitis, Japanese encephalitis, and agents of lymphatic filariasis.  Fortunately, most of these are not found in Minnesota where these larvae were found!
Posted by ParasiteGal at 9:36 AM