Answer to Parasite Case of the Week 563: Anisakid larva, not Anisakis species.

As noted by Marc Couturier, this case has a "very nice and clearly defined intestinal caecum [or 'cecum' for my United States readers]. Lips are visible on the worm and the general size would point again to an Anisakidae member. Coughing up and the abdominal pain are helpful clinical correlates as well." Blaine also added some helpful information regarding the diagnostic features of anisakids: "Based on the anteriorly-directed cecum, this is either Pseudoterranova or Contracaecum. Unfortunately it is not possible to definitively tell from the image if a posterior ventricular appendix is present (Contracaecum) or absent (Pseudoterranova). Anisakis species lack both." He also noted that all 3 genera may have an anterior boring tooth.

The arrow in the following image points to the anteriorly-facing cecum. 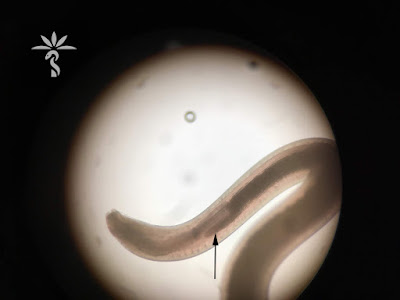 Thanks again to Idzi for donating this beautiful case. I thought that it nicely complimented last week's case, which had a nice clinical (endoscopy) image but lacked a view of the defining morphologic features.