This was a very nice clear-cut example of a mixed infection. Often they aren't this clear cut! Thanks to everyone who wrote in with the very nice morphologic descriptions supporting the diagnosis.

Santiago noted that "The first five images show many diagnostic morphologic features: the infected RBCs are enlarged, they have an oval shape with jagged edges (fimbriations), Schüffner's dots (fine cytoplasmic stippling) are present in their cytoplasm, and infecting trophozoites are compact; these features are consistent with infection by Plasmodium ovale. 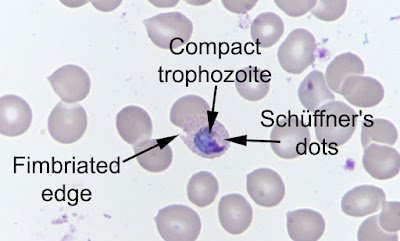 The last two images show banana-shaped gametocytes which are diagnostic of Plasmodium falciparum.

My follow-up question was regarding which additional studies, if any, would be recommended. In this case, the morphology is very convincing, and so diagnostic PCR is likely not needed.  However, it was available in this case, and confirmed the diagnosis of P. falciparum and P. ovale mixed infection. Several of you also correctly noted that quantification of parasitemia is also indicated to guide therapy.

Finally, knowing more about the patient would be important to direct patient care. Information to gather would include where the patient had traveled (to determine if there is circulating resistance to commonly-used antimalarials) and if prior antimalarial therapy had been administered. The fact that only P. falciparum gametocytes were present may indicate that the patient had received prior therapy, since the drugs commonly used to treat P. falciparum are not gametocidal. Thus seeing residual P. falciparum gametocytes is not uncommon after successful treatment.  Now that we know that the patient has P. ovale co-infection, primaquine (or tafenoquine) must be administered to eradicate its hypnotzoite stage (dormant stage in the liver).

Thanks again to Marc and Blaine for donating this case.
Posted by ParasiteGal at 10:49 AM