Answer to Parasite Case of the Week 596: Plant material; likely plant epidermis from leafy material. There appears to be a cuticle present, and part of an epidemal cell layer attached. 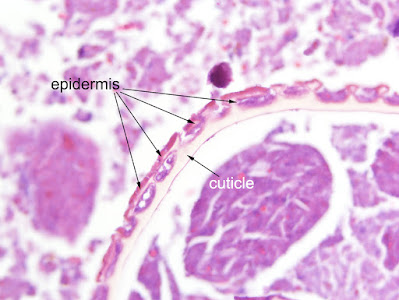 There are several nice images of dichotomous leaf epidemal structure HERE. Mary Parker, a botanist, noted that "in aqueous conditions, I  would expect an epidermal layer to curl with the cuticle inwards (which is the case in the images) as the cuticle is waterproof and doesn't swell, whereas the epidermal cells would be hydrated and expand forcing the layer into a spiral." Thank you Mary for your valuable input! Mary has also provided assistance with Case 534 in which we showed plant stomata, and Case 468 that showed banana material. Parasitologists and pathologists commonly see food material in fecal and intestinal specimens, as well as in cases of bowel rupture/fistula and food aspiration (i.e., in respiratory specimens). Therefore, it's helpful to have some basic familiarity with how plant material appears in routine preparations.

Several writers asked if this could be Enterobius vermicularis or Trichuris trichiura. While the size and location may fit with either of these roundworms, the cuticle and attached cellular structure shows some subtle differences that are useful for excluding them. Specifically, the thick acellular roundworm cuticle is adjacent to a muscular layer, as shown in the images below. In comparison, the plant cuticle is adjacent to the boxy cells of the epidemis. I also highlighted some features that are useful for specifically identifying E. vermicularis and T. trichiura (i.e., lateral ala and bacillary band). 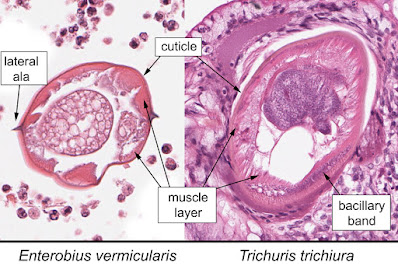 One additional study that would have been helpful in this case would be to use a polarizer to see if the cuticle and cells are birefringent. Plant cell walls often are, whereas nematode cuticles are not.
Thanks again to Bobby Boyanton for donating this interesting case!