Answer to Parasite Case of the Week 602: insect larva, consistent with a member of the Psychodidae (drain/sewer fly) larva. As Richard Pollack noted, this is "Not from patient but from commode. Upon their discovery, folks often jump to the conclusion that they derived from the bladder or intestine. There are reports in the literature of myiasis from these flies, but one should generally be skeptical." It turns out that this is exactly what happened in this case. The specimen consisted of urine taken from the toilet water.

Florida Fan added "Being not an entomologist, I would say latrine fly larva and leave the entomology part to those specialists. The specimen has all the anatomy parts of water insect larva including a breathing tube at the posterior. For sure this would be a startling finding but, to the layman it may create a stunning effect at least."

I agree with Florida Fan that putting an actual name on this larva is not important for clinical care. What is important is identifying this as a non-parasitic larva. The presence of a respiratory siphon (breathing tube) in this case is a good indication that this is not a myiasis-causing fly larva. Other features seen here that would not be seen in a myiasis-causing larvae are bristles and a sclerotized head capsule. 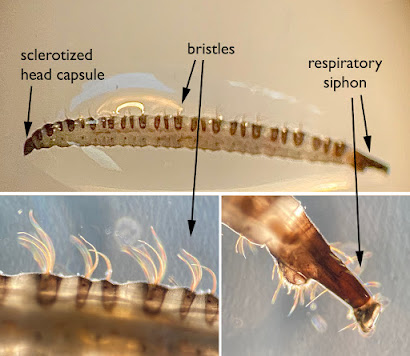 Posted by ParasiteGal at 4:13 PM

Here are several reasons that I still entertain the POSSIBILITY that this genus may cause urogenital myiasis.

1. Yes , a breathing tube is present, in addition I believe the bristles to be gills similar to this used by a number of aquatic insect larvae (example Hydropsychidae) which allows respiration at low oxygen tension.
2. Why is it that Psycoda is found almost exclusively in these case reports? What about the other drain fly genera ?
3. I agree with Blaine that most of the case reports are wanting. But I am haunted by the 1929 case of a boy
where they found larval psychoda cytscopically in the bladder.

Just entertaining the possibility. With the plague going on, I can use all the entertainment I can get.