Answer to Case of the Week 603: Borrelia sp. spirochetes. The history is most consistent with a relapsing fever Borrelia sp., and subsequent PCR showed this to be Borrelia hermsii.

As Florida Fan mentioned, this case is a great reminder that when we examine a Giemsa-stained blood film, we may find things other than parasites. In addition to spirochetal bacteria such as in this case, we can find intracellular clusters (morulae) of Anaplasma phagocytophilum and Ehrlichica spp. bacteria, and intracellular years (e.g. Histoplasma capsulatum, Talaromyces marneffei). Leishmania spp. amastigotes can also rarely be seen within phagocytic cells. I've shown Borrelia spirochetes on this blog before (see Case of the Week 502), but never on a thick film, so I thought this would be a nice case to include here.

Note that the spirochetes are uniformly slender with broad undulations. This is different than the microgametes of an exflaggelated Plasmodium sp. microgametocyte which I previously showed on Parasite Case of the Week 595. In that case, I created a composite image of 'squiggly things' seen on a blood smear which may be helpful in identifying and differentiating them: 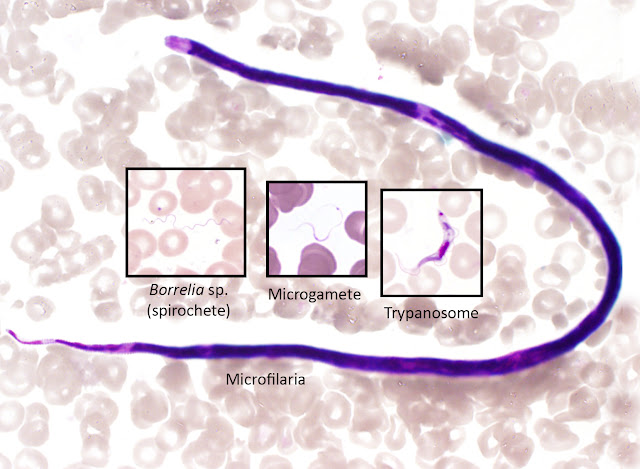 Some readers asked if the Borrelia species that cause Lyme disease could also be seen on blood film. The answer to this is NO - with one small caveat. The main cause of Lyme in the United States and Canada is Borrelia burgdorferi, whereas in Europe, you can also see B. garinii and B. afzelii. These organisms have extremely low levels of spirochetemia, and therefore spirochetes are NOT seen on peripheral blood films. The only rare exception to this is Borrelia mayonii, an uncommon cause of Lyme disease restricted to the upper Midwestern United States. This organism is actually found in much higher concentrations in the blood, and occasionally a rare spirochete can be seen on peripheral blood smears. We published on this several years ago; you can read the article HERE. (Let me know if you would like a copy).

There were many other good comments posted on this blog case - both in the Comments section and on Twitter - so I would encourage you to read them to learn more about the experiences from our readers.

Posted by ParasiteGal at 4:08 PM

Wow, one little knock reverberates with such an astounding return . Thank you Dr. Pritt for such an enriching gift of knowledge.
Florida Fan