Answer to the Parasite Case of the Week 640: Pseudoscorpion

Despite the scary look of this arthropod's front pincers (enlarged pedipalps), it is not a scorpion and does not harm humans. In fact, pseudoscorpions can be helpful; Dwight Ferris pointed out that they feed on other arthropods pests that you don't want in your house such as carpet beetles, book lice, ants and clothes moths.

The main way to tell a pseudoscorpion apart from a true scorpion is that the former is much smaller (usually < 5 mm long) and lacks a telson (venom bulb) and aculeus (stinger) at the end of their abdomen. Of note, both pseudoscorpions and scorpions are arachnids and have 8 legs in their adult form - just like ticks and mites. 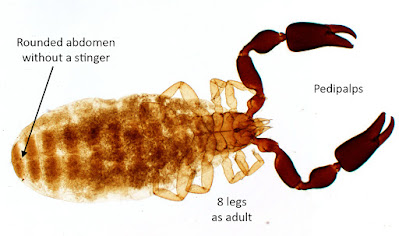 Pseudoscorpions may occasionally be submitted to the laboratory after concerned individuals find them in their home and bring them to their physician. That is probably how we received this one. However, Chuck Blend also noted that they are commonly found in the library, 'hanging out' between the pages of old books. You can also find them out in nature, under stones, leaf litter, tree bark and mulch.

Posted by ParasiteGal at 1:47 PM