As mentioned in the comments, other items on the differential diagnosis include larvae of the hookworms and Ascaris lumbricoides. The larvae of these nematodes are only rarely seen during the initial stage of infection, in which larvae migrate to the lung before reaching their permanent destination in the intestinal tract. For that reason, it is very rare to identify them in clinical specimens. In comparison, S. stercoralis has an ongoing autoinfection cycle in humans which results in recurrent migration of L3 larvae through the lung. This normal low-level of autoinfection is often subclinical and allows the infection to persist for decades. However, immunocompromised patients (such as those receiving corticosteroids like this patient) are at risk for hyperinfection, during which large numbers of L3 larvae leave the intestinal tract and migrate to the lungs and other organs. This is the common scenario in which larvae are found in respiratory specimens.

In addition to the clinical indicators of strongyloidiasis (patient from Kentucky, receiving immunosuppressive agents), there are a few morphologic features that can be used for differentiating S. stercoralis larvae from other nematode larvae found in the lung. One of the primary features is the shape of the tail. S. stercoralis L3 larvae have a subtly-notched tail, whereas the hookworm L3 larvae (the stage found in the lung, and rarely in unfixed stool examined several days after passage) have a pointed tail. I believe that A. lumbricoides L3 larvae also have a pointed tail - can anyone tell me for sure? 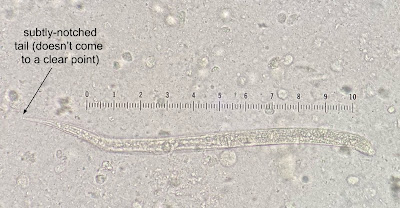