Answer to the Parasite Case of the Week 650: Male Ascaris lumbricoides

As nicely stated by Florida Fan, "Ah Ha, once more the male round worm finds its way out. Judging by the curved tail and the size, it’s a male Ascaris lumbricoides. The female is longer and larger with a straight tail. Hopefully this is the only one in the patient, and though terrifying, it’s good riddance for the host." 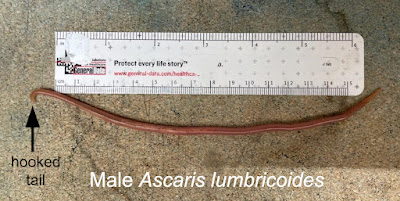 A. lumbricoides females can be up to 35 cm long (range of fully mature females is 20-35 cm), whereas males are slightly smaller at 15-30 cm long.

Adults usually reside in the small intestine, but can occasionally migrate to ectopic locations such as the appendix and pancreatic duct. As seen in this case, they can also travel  in a retrograde manner against peristalsis, up through the stomach, the eosphagus, and out the mouth or nose. Yikes!

Thanks again to Seema for donating this classic case.

Posted by ParasiteGal at 5:12 PM