Answer to the Parasite Case of the Week 648: Most likely Strongyloides stercoralis filariform larva. Recommend examining the tail to look for a characteristic "notched" tail, (which is unfortunately not visible in the images in this case), and obtaining stool specimens for ova and parasite examinations and Strongyloides agar plate culture. 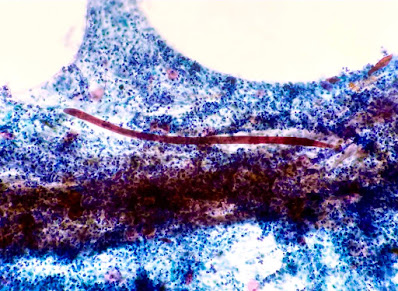 As mentioned by several readers, there are other filariform larvae that should also be considered in this case, such as those of Ascaris lumbricoides and the hookworm larvae. These larvae may rarely be seen during their initial lung migration stage in association with Loeffler's syndrome. S. stercoralis differs from these other nematodes in that the filariform larvae migrate to the lungs repeatedly during the long lifecycle in humans as part of an internal autoinfection process., and are therefore more likely to be found in sputum and BAL specimens than other intestinal nematodes. Also, immunocompromised patients are at risk for strongyloides hyperinfection in which large numbers of larvae migrate to the lung, causing a potentially life-threatening syndrome with bacterial sepsis and lung damage. Many S. stercoralis larvae may be found in respiratory specimens during this syndrome.

I've featured this case from Dr. Seema B. to discuss the differential of nematode larvae in human respiratory specimens, as well as to show the beauty of these helminths in Pap-stained preparations. They make a striking image! Thank you again to Dr. B. for sharing this case.

Posted by ParasiteGal at 9:18 AM

As always wonderfully enlightening. Thank you.

To tell the truth, my first thought was Strongyloides filariform larvae, but lacked of a clinical history made me fairly leery. Thank you Dr. Pritt for your instructive explanation.
Florida Fan