Answer to Parasite Case of the Week 568: Pseudoscorpion or false scorporion, not a human parasite. 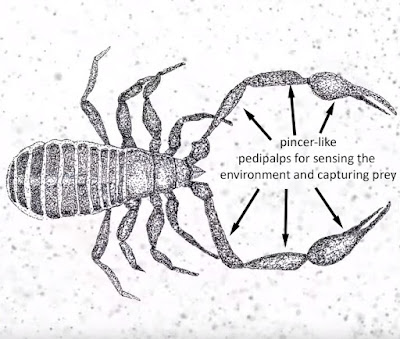 Thanks again to Old One and his son for the donation of the cool animated illustration.
Posted by ParasiteGal at 1:24 PM

Actually, because it is only an illustration and not the real thing, it's a pseudopseudoscorpion.

I have heard there are about 1500 species of pseudoscorpions world wide. This particular species Chelifera cancroides is the species most likely encountered in the home and is commonly called the "House Psuedoscorpion". It has been encountered in bee hives attacking Verroa mites, however subsequent research shows them to be ineffective for their control.

This particular individual was found on the clients leg. Because of the claws the client thought it was a "Crab Louse" Needless to say, I was hero of the day.