Answer to Parasite Case of the Week 570: Ixodes scapularis adult female with a missing external capitulum and mouthparts. Or as Blaine noted, "A headless tick:  Ichabod scapularis!"

The image below shows these parts where they are normally located on the accompanying female tick (white oval): 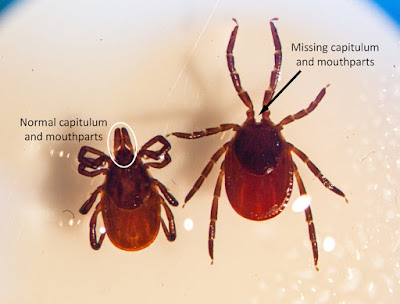 So how did this happen? Well, Dave and some of our readers rightly indicated that the tick must have taken 2 prior blood meals in order to molt from larva to nymph, and then nymph to adult; thus it must have had functional mouthparts during those previous stages. However, as Dave noted, "something went horribly wrong during the last mold from nymph to adult. Given the radical changes that occur during a molt, I am surprised that we don't see more obvious mutations!" He also shared that he has seen several 7-legged ticks from his regular field collections in Minnesota, but surprisingly, no other mutants. He hypothesized that the capitulum and mouthparts are still present, but that they are inverted and therefore not externally-facing. The lack of of the visible capitulum and mouthparts has shifted the position of the legs, thus making them look longer. Finally, he commented on the "sclerotic structure" noted between the first pair of the legs by Makrone.  He also had seen this and speculated that it might be some of the residual tissue from the inverted mouthparts/capitulum.

Thanks to Dave for the fascinating case! As Sam mentioned, Ixodes scapularis is the vector for Babesia microti, as well as several bacterial pathogens and Powassan virus. Wouldn't it be great if they were all 'headless'?
Posted by ParasiteGal at 10:58 AM