Answer to Parasite Case of the Week 535: Demodex sp. mite

There are two described Demodex species that are parasites of humans: D. folliculorum and D. brevis. They are characteristically differentiated by their location on the host and the length of their body. Demodex folliculorum lives in hair follicles and has a long opisthosoma (abdomen/posterior end), whereas D. brevis lives in sebaceous glands attached to hair follicles and has a shorter opisthosoma. Molecular analysis (e.g. using 16S rDNA) can also be used to differentiate the two species, and generally correlate with the morphology-based identifications.

Here is a general overview of the Demodex body segments: 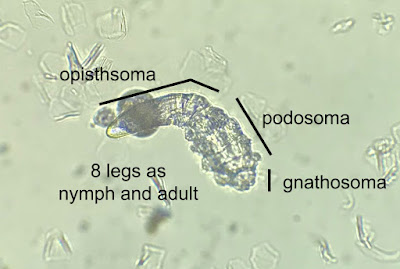 Some of you wrote in trying to guess which of the two species is represented in this case. Unfortunately, the features aren't clear cut, and so we will have to call this simply Demodex sp.


Now here's a poem by Blaine:
So many people think they live immaculate lives
but among their hair follicles another creature thrives
you can shower and scrub to your heart's content
but all that effort won't make a dent
because the mite Demodex folliculorum continues to survive
Posted by ParasiteGal at 8:04 PM