Answer: Raillientina species, a parasite primarily of rodents and poultry. Kudos to Idzi for mentioning this in his differential!

As many noted, this parasite bears a striking resemblance to Dipylidium caninum, with production of small 'rice grain' like proglottids (which may be motile in freshly-passed stool) and collections of eggs - each containing a hooked larva.

This was definitely a challenging case. I didn't provide a high power view of the proglottid. If I had, you would have noted that it only had a single lateral or dorsal uterine pore (depending on the species) rather than the two lateral pores - one on each side - of D. caninum.

Another feature that allows differentiation of this parasite from D. caninum is the presence of dark-centered eggs capsules rather than egg packets. Egg capsules are a characteristic of cestodes in the genera Inermicapsifer and Raillietina. They measure 100-200 micrometers in diameter and contain 1-12 eggs, each containing a hooked larva. 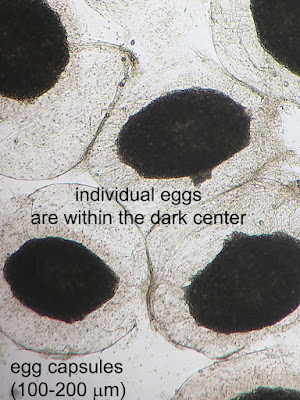 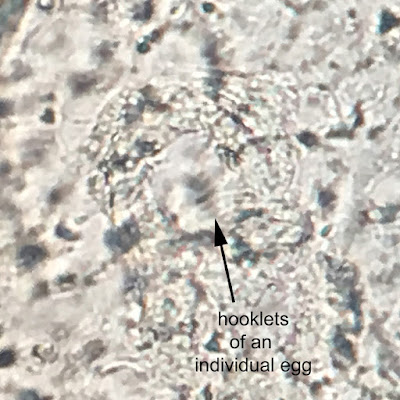 Differentiation of Inermicapsifer and Raillietina is achieved by examing the scolex; Raillietina has an 'armed' scolex (containing hooklets), while Inermicapsifer has an unarmed scolex. Unfortunately the scolex was not recovered in this case - it is rarely recovered from humans - and so morphology alone could not be used to differentiate the 2 cestodes. However, Richard, Blaine and Mark were able to exclude Inermicapsifer in this case due to the location of the patient and lack of travel history. You can read more about this case HERE.
Posted by ParasiteGal at 11:41 AM

Wow, such a wild case. I could not be more wrong and then some more. The case really should have been likened to "enigma"!!! Happy to learn and yes, we will.
Thank you Dr. Pritt for such a head spin.
Florida Fan.