I have a fun case for you this week, donated by Dr. Richard Davis, Blaine A. Mathison, and Dr. Marc R. Couturier from ARUP Laboratories and the University of Utah School of Medicine.

The following objects were found in stool of a toddler living in the Oceania region. There were motile and described as "rice like". 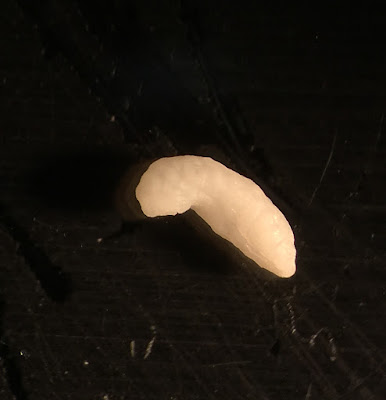 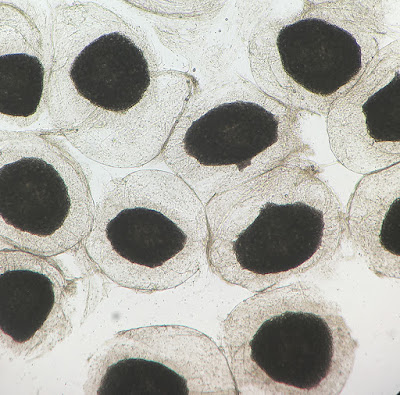 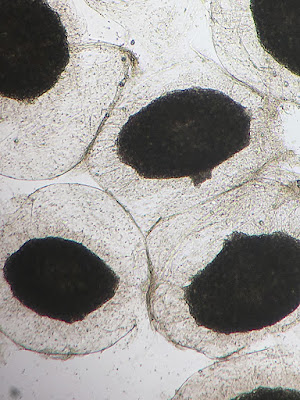 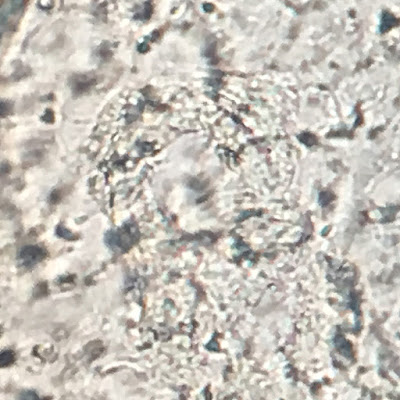 Identification?
Posted by ParasiteGal at 6:58 PM

Dipylidium proglottid, but the eggs are infertiles.

Agree with a Dipylidium caninum proglottid. The last picture seems to be a six-hooked oncosphere.

The object as described "rice grain" shape and motile is compatible with Dipyllidium caninum proglottids. These are only motile for only a minute or so, after that they are still. Yet, what bothers me is the black interior of what appears to be packets of eggs.
What may happen is photographic technical difficulties. Yes, parasites have to be seen in different focal planes, lighting conditions, and the camera cannot always capture a "picture perfect" as seen on the ASCP atlas or CDC DPDX website.
As such, we need to appreciate the work of the technical staff who gave us such beauties.
Florida Fan

There appears to be annular segmentation below the membrane of photo #1. I believe this to be a late stage dipteran egg (soon too hatch).

I believe the egg-like structures are possibly yolk or fat cells from the egg (just a guess).

I see crows at my bird feeder today. I should shoot one, I'm probably eating crow tonight.

Old One, are you sure those are crows and not a raven?

The clock struck midnight in the lab
and while doing microscopy
I heard a tapping at the door
I looked but nothing lay in the darkness
And so I turned to the scope once more
And to my amazement
there was a cestode!

Whose proglottids crept across the bench
and made its way onto the floor
the desire to identify it, I must quench
for all the features thay lay before me
I fear it's something I have not seen before
Will I let Blaine's case baffle me?
Nevermore!

No matter how much I impore!
No reliable diagnosis comes to mind!
No known features apply to him
No prayer helps me to identify him
And I must fear for evermore
that I must dig deeper, although it's a chore
as to not become a footnote in the annals of Parasitology folkore
So Blaine's cases will fool me...nevermore!

Quote the Raven, "no more, NO MORE"

FYI Crow tastes a lot like chicken, but with a bitter after taste

To eat crow or not to eat crow, that is the question...
Everything about the case points to Dipyllidium caninum (toddler, moving rice-grains, big structures of 200 microns containing smaller objects of about 30 microns,...), but I don’t seem to recognize any “typical” structures...
I am inclined to agree with Silvia and to go for D. caninum (immature segments?) with eggs that have not yet completely developed.
Intriguing case...

Or maybe even a case of Inermicapsifer infection...

As I lie here, slowly bleeding
Much compassion I be needing

For ignoring the wisdom of forgotten lore
Suddenly there came a rapping, a tapping at my chamber door

Twas Idzi, my friend or so I thought, to quell my grieving heart
But from his breast coat he pulled a Raillietina rapier with a horrid start

Et tu Idzi, were not Braine’s words enough
To destroy my spirit and make my shoulders slough

Idzi croaked as he struck his gastly blade “Old One, Nevermore”

This blog is taking me to strange places...
:-D

OK, while the moving life form may lead us to the identification of D. caninum proglottid, it does lack the some what rectangular ends of a cestode. The second aspect is that what we have as "eggs" look more like honeycomb with a dark central yolk, not typical of D. caninum ova.
Oceania is for the most part very rural except for a narrow fringe on the coast line where it is inhabited most of the interior is the Outback with no Steak House. The more North you travel, the more tropical it is and this supports a plethora of insect life.
These clues point us more to the identification of an insect larva, what is perplexing is how it gets to the feces of the patient and how old that sample is, as well as the collection conditions.
I believe Old One identification is justified.
Florida Fan

I stick with a case of a cestode (D.caninum was my first reluctant tought). However it may be something more peculiar. As stated by idzi, is this a case of raillietiniaisis? An intriguigging case in deed. Let's wait....

Differentiation between Raillietina and Inermicapsifer can be made using the position of the genital pore of the proglottids, which I cannot discern in this case without staining or clearing. I wonder if geography will help us here... would Inermicapsifer madagascariensis be found in Oceania? Are there other species of Inermicapsifer?
I wonder...
Splendid case !!!
Thanks guys!!!

What an interesting case! I have some doubts about his diagnosis, although as Idzi pointed out it could be Raillietina or Inermicapsifer rather than Dipylidium. I look forward to the result.
Luis

I've been so impressed with your individual and group wisdom. Your ability to properly identify astounds me.

Here's an opportunity to learn from a mistake (my mistake in particular since you guys don't make many). I have an hypothesis that a good diagnostician has a keen sense of " fit" for an accurate diagnosis and confidence that you are correct. I had my doubts about my ID and I knew deep down that I'd be "eating crow/raven".

The take away is for all of you to trust your sense of "fit".

Wow, as always, excellent commentary on this case! :)
You all inspire me to provide the best possible cases and explanations possible. Hopefully I will do this one justice.
Bobbi

Hello Guys.Have you heard about programmed ATM card? We have special cash loaded programmed ATM card for you to start up your own business. Our ATM card can be used to withdraw cash at any ATM or swipe, stores and POS. Our card has daily withdrawal limit depending on the card you order. Contact us now to know our card balance and cost.
CONTACT DETAILS
Email/nashwilliams4@gmail.com
whatsapp/+2349057353987